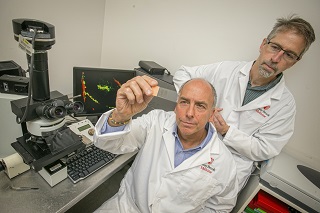 STONY BROOK, N.Y., December 4, 2013 – A team of Stony Brook University researchers led by William Van Nostrand, PhD, Professor in the Department of Neurosurgery, has discovered in a model of Alzheimer’s disease that early accumulation of a small protein, known as amyloid β, in the blood vessels of the brain can drive early cognitive impairment. The findings, published in the current online edition of the
Journal of Alzheimer’s Disease
, suggest that targeting early buildup of amyloid in brain blood vessels could be a potential treatment strategy in early stage disease.

In the research paper, titled “Cerebral Microvascular Rather than Parenchymal Amyloid-β Protein Pathology Promotes Early Cognitive Impairment in Transgenic Mice,” the Stony Brook team compared two disease models – one that developed amyloid plaques and the other that developed cerebral blood vessel amyloid. The team assessed cognitive abilities at intervals and found that at three months, the model with brain blood vessel amyloid were cognitively impaired but the model with amyloid plaques were not cognitively impaired.

“Our results are intriguing because it appears cerebrovascular amyloid rather than amyloid plaques around neuronal cells is an early influence on cognitive decline,” said Dr. Van Nostrand. “This opens the door to continued investigation on the role of amyloid on brain blood vessels in the Alzheimer’s disease process and could be a first step toward developing more effective treatment targets for the onset of amyloid-associated cognitive impairment based on this particular type of amyloid buildup and associated pathologies.”

Dr. Van Nostrand cautioned that much more investigation using various comparative amyloid models is necessary before concluding that cerebral blood vessel amyloid is a key treatment target for early disease onset. He added that while amyloid buildup appears to be a pathology associated with Alzheimer’s disease, given the complicated disease process, it is not fully known the relative impact of each of these amyloid lesions within the brain on cognitive impairment.

The work leading to the findings was supported in part by grants from the National Institutes of Health.