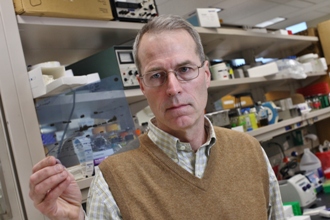 A professor of Molecular Genetics and Microbiology, Bliska elected for distinguished contributions to the field of microbial pathogenesis

Stony Brook, NY, November 25, 2013 – James B. Bliska, Ph.D., Professor in Stony Brook University’s Department of Molecular Genetics and Microbiology, was elected a Fellow of the American Association for the Advancement of Science (AAAS) for his scientific and social efforts to advance science or its applications.

Dr. Bliska was elected for distinguished contributions to the field of microbial pathogenesis, particularly for establishing new paradigms at the interface of bacterial virulence factors and host cell biology. The ultimate aim of Dr. Bliska’s research is to provide a framework for the development of novel vaccines and antimicrobial agents that can be used to treat or prevent bacterial infections in humans.

“This accomplishment would not have been possible without the contributions of the exceptional mentors, collaborators, colleagues and students that I have been fortunate enough to interact with at Stony Brook University and throughout my career,” Dr. Bliska said.

Dr. Bliska is among 388 newly elected members who will be honored at the Fellows Forum held during the national meeting for the AAAS being held February 15, 2014. All Fellows receive a certificate and a blue and gold rosette pin as a symbol of their distinguished accomplishments.

Dr. Bliska’s primary research focus is to further the understanding of the molecular mechanisms that underlie bacterial pathogenesis or host cell protection during host-microbe cell interactions. In particular, he is interested in studying the activities of virulence factors that promote pathogenesis, as well as trigger the innate protective and adaptive host cell immune responses.

“Much like a double-edged sword,” he explains, “bacterial toxins have a dual nature. They can harm us, but it turns out that the immune systems in our bodies can take advantage of these same toxins to generate protective responses, much the same way that a vaccine works.”

His research also expands into the areas of genomics and epidemiology of bacterial pathogens.

Dr. Bliska joined the Department of Molecular Genetics and Microbiology at the Stony Brook University in 1993.  Discoveries in his laboratory have led to advances in the fields of Bacterial Pathogenesis and Cell Biology.  There he pioneered work on a specialized bacterial toxin secretion mechanism that is now referred to in microbiology as Type III Secretion, a significant finding that broadened the research field known as Cellular Microbiology.  Dr. Bliska also designed an approach that is utilized to identify host cell targets of a bacterial toxin.  This unique technological advancement has been widely adopted by other researchers. Dr. Bliska’s has work has revealed that host cells have innate immune mechanisms that can detect bacterial toxin secretion, a finding of general importance in the field of Immunology.

During his tenure at Stony Brook, Dr. Bliska has received numerous National Institute of Health (NIH) research grants. In 2003, he was also named Director of a NIH grant that supports career development and training in Infectious Disease research for pre-doctoral students at the University. Dr. Bliska’s other accomplishments while at Stony Brook include a Pew Scholar Award in 1994, election to the American Academy of Microbiology in 2012, and an appointment as Editor of the journal Infection and Immunity in 2003.

Dr. Bliska received a B.S. in Bacteriology from the University of Wisconsin at Madison in 1983. In 1988, he earned his Ph.D. in Molecular Biology from the University of California at Berkeley, under the mentorship of Dr. Nicholas Cozzarelli. His postdoctoral training in Bacterial Pathogenesis was performed in the laboratory of Dr. Stanley Falkow from 1988 to 1993 at Stanford University.

Dr. Bliska lives in Setauket with his wife Dr. Janice Valmassoi and daughters Emma and Hanna.