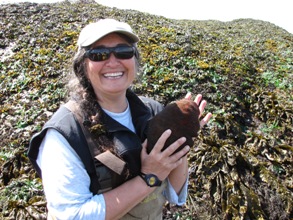 A professor of Ecology and Evolution, Padilla elected for distinguished contributions to aquatic invasion ecology

Stony Brook, NY, November 25, 2013–Dianna Padilla, Ph.D., Stony Brook University Professor in the Department of Ecology and Evolution, was elected a Fellow of the American Association for the Advancement of Science (AAAS) for her scientific and social efforts to advance science or its applications.

Dr. Padilla was elected for distinguished work in marine and freshwater ecology, particularly in aquatic invasion ecology and the role of phenotypic plasticity in plant herbivore interactions.

“It is an honor to be recognized by peers for the body of work my students and I have produced,” said Dr. Padilla.  “Hopefully this recognition will encourage more young students to pursue careers in this area of science.”

Dr. Padilla is among 388 newly elected members who will be honored at the Fellows Forum held during the national meeting for the AAAS being held February 15, 2014 in Chicago. All Fellows receive a certificate and a blue and gold rosette pin as a symbol of their distinguished accomplishments.

Dr. Padilla’s research interests include marine and freshwater ecology, conservation biology and restoration; invasion biology and the patterns of spread and impacts of invading species in freshwater and marine ecosystems; functional ecology including studies of phenotypic plasticity, inducible defenses and offenses; and impacts of environmental change on marine ecosystems, including impacts on early life stages of animals and species interactions.

Dr. Padilla is also an Aldo Leopold Leadership Fellow, which works through the Ecological Society of America.

She has been very active in working with others to identify and articulate the Grand Challenges of organismal biology for the 21st century and developing a research agenda to address those important Grand Challenge questions.

Dr. Padilla is also engaged in mentoring young students in research, including high school students from Brentwood High School.  Many of these research students have received national and international recognition for their research.