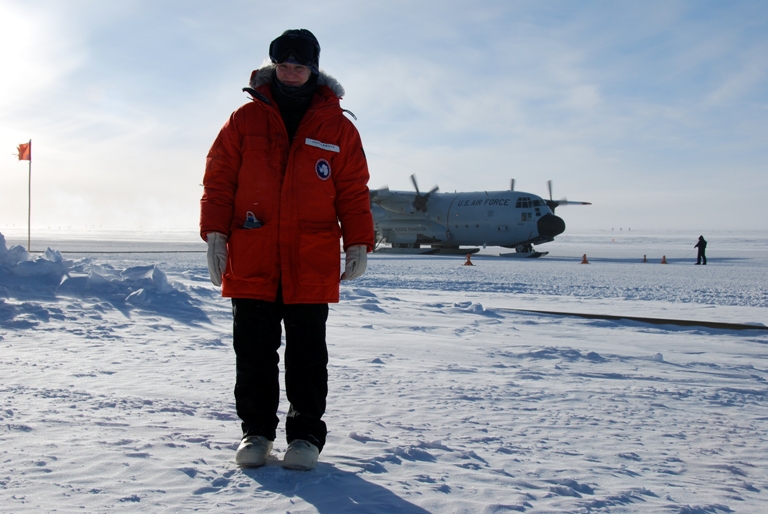 STONY BROOK, NY November 22, 2013-The Universe is always talking to us, but we have to be clever to hear what it’s saying. That was the thinking behind the IceCube Neutrino Observatory, a unique astrophysical telescope deployed deep in the Antarctic ice to detect neutrinos—very small, nearly massless particles—coming from the outer reaches of our galaxy and beyond.

(Listen to the NPR story).

Stony Brook University Assistant Professor of Physics Joanna Kiryluk is part of the team that published the project’s ice-breaking results—the observation of 28 very high-energy particle events, the first solid evidence for astrophysical neutrinos from cosmic accelerators. The paper, titled “Evidence for High-Energy Extraterrestrial Neutrinos at the IceCube Detector,” appears in the November 22 issue of the journal Science.

“The major question that has not been answered yet is where do the ultra-high energy cosmic rays come from?” asks Kiryluk. “We know that there are cosmic rays that have huge energy, created by cosmic ‘accelerators’ that have the enormous power to produce them, far beyond what we can produce on earth with accelerator beams. But we don’t know where such cosmic rays are produced. Finding the high-energy neutrinos, and then looking at those neutrinos for sources, we can find the cosmic accelerators.”

Neutrinos appear during particles weak interactions. Some were created 15 billion years ago during the early stages of the Big Bang and some continue to be produced within, or near, extreme cosmic objects, such as black holes. Because they rarely interact with matter, neutrinos can carry information about the workings of the highest-energy and most distant phenomena in the Universe. While billions of neutrinos pass through the Earth every second, the vast majority originate either in the Sun or in the Earth’s atmosphere.

Neutrinos from the outer reaches of space are rarer. It has long been theorized that they may provide insights into the powerful cosmic objects where high-energy cosmic rays may originate—supernovas, black holes, pulsars, active galactic nuclei, gamma-ray bursts, and other extreme extragalactic phenomena.

IceCube is run by the international IceCube Collaboration and headquartered at the Wisconsin IceCube Particle Astrophysics Center (WIPAC) at the University of Wisconsin–Madison. It was designed to accomplish two major scientific goals—measure the flux, or rate, of high-energy, extraterrestrial neutrinos, and try to identify some of their sources. The analysis presented in Science reveals the first high-energy neutrino flux ever observed, a statistically significant signal (more than 4 sigma) that meets expectations for neutrinos originating in cosmic accelerators.

“From hints in earlier IceCube analyses, we have used improved analysis methods and more data to make a significant step forward in our search for the elusive astrophysical signal,” says spokesperson Olga Botner, of Uppsala University. “We are now working hard on improving the significance of our observation, and on understanding what this signal means and where it comes from.”

Dr. Kiryluk and her team at Stony Brook are analyzing the data, which is collected by sensors and pre-processed and filtered on-site in Antarctica. Significant event data is then transmitted via satellite to computer clusters at the UW–Madison, from where it is accessed by the Stony Brook researchers. Dr. Kiryluk is working with a post-doctoral research associate Dr. Mariola Lesiak-Bzdak; graduate students Hans Niederhausen and Yiqian Xu; Fulbright Fellow Anna Steur; and Christopher Urban, an undergraduate physics major student.

“I think this research will have a huge impact for Stony Brook University,” she says. “The project will continue for the next 10-15 years. The IceCube detector is now complete. The collaboration is producing exciting results, and it is an absolutely fantastic experiment to attract students.”

It’s not hard to see the fascination. IceCube itself, where the data originates, is an engineering marvel. Holes were drilled in the ice to a depth of up to 1.5 miles with a special hot-water drill using a high pressure hose that melted through the ice at rapid speeds. Basketball-sized detectors called digital optical modules (DOMs) were attached to a cable and lowered into the holes. There are more than 5,160 DOMs in the ice and an additional 344 on IceTop, a complementary detector on the surface of the ice.

The darkness at that ice depth is crucial. When a neutrino interacts in the ice, it produces the tiny flashes of blue light that are detected by the DOMs, which can only detect this light in a very dark environment. The direction and intensity of the light allows the researchers to determine where the neutrino was coming from in the Universe. “This is the dawn of a new age of astronomy,” says Francis Halzen, principal investigator of IceCube and the Hilldale and Gregory Breit Distinguished Professor of Physics at the University of Wisconsin–Madison.

The IceCube Neutrino Observatory was built under a National Science Foundation Major Research Equipment and Facilities Construction (MREFC) grant, with assistance from partner funding agencies around the world. The NSF’s Division of Polar Programs and Physics Division continue to support the project with a Maintenance and Operations grant, along with international support from participating institutes and their funding agencies. UW–Madison, as the lead institution, heads an international collaboration that includes 250 physicists and engineers from the U.S., Germany, Sweden, Belgium, Switzerland, Japan, Canada, New Zealand, Australia, U.K. and Korea.

Dr. Kiryluk spent two weeks at the site. She took a commercial flight to New Zealand, where she was fitted for extreme cold weather gear, then flew on a Boeing C-17 military transport to McMurdo, a U.S. station on the Antarctic coast. From there she caught a flight to the South Pole on a ski-equipped Lockheed LC-130 Hercules, which deposited her at the Amundsen-Scott South Pole Station.

The NSF-managed station includes astronomers, biomedical researchers, meteorologists, physicists, glaciologists, and support staff. Located on top of an ice sheet up to 3 kilometers thick, at an altitude of close to 10,000 feet, it houses some 200 people, and includes an industrial kitchen, dining room, gym, and greenhouse.

“I can tell you that it was the best trip ever,” says Dr. Kiryluk. “It was the adventure of my life. I won’t ever forget it, it’s absolutely a unique experience.”

Citation: “Evidence for High-Energy Extraterrestrial Neutrinos at the IceCube