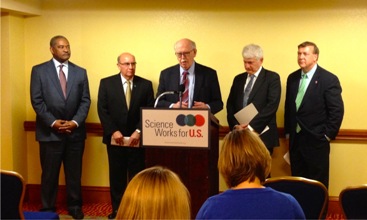 WASHINGTON, DC – As congressional budget leaders continue negotiations over Fiscal Year 2014 spending levels, three organizations representing the nation’s leading public and private research universities today released the results of a new survey looking at sequestration’s impact on research across the country. The survey is a bellwether of the devastating impact that sustained cuts to research and higher education will have on the economy and the United States’ role as a global innovation leader.

The Association of American Universities (AAU), the Association of Public and Land-grant Universities (APLU) and The Science Coalition (TSC), which collectively represent nearly 300 higher education institutions nationwide, including 171 research universities, conducted the survey and released it at a press conference at the APLU Annual Meeting in Washington, DC.

“Sequestration is a blunt and reckless tool that has chipped away at the core role our institutions play for the country in conducting critical research that leads to next generation, technological breakthroughs. Even in its earliest phase, sequestration is permeating every aspect of the work that our research universities do,” said APLU President Peter McPherson.

“These effects have occurred despite the efforts of our institutions to bridge the gap and cover some of the losses resulting from reduced or delayed grants. These efforts can cushion the blow only so long. The survey trends today will worsen and then be deeply entrenched a year from now if sequestration remains in place.”

“If Congress fails to reverse course and doesn’t begin to value investments in research and higher education, then the innovation deficit this country is facing will worsen as our foreign competitors continue to seize on this nation’s shortfall,” McPherson said.

Sequestration took effect in March and will remain in effect for another eight years unless Congress acts. The survey, conducted in October at the close of the federal fiscal year, found that the mandatory cuts to discretionary spending (from which research budgets are funded) already were taking a toll. The most commonly cited impacts of the sequester among survey respondents were a reduction in the number of new federal research grants (70% of responding universities) and delayed research projects (also 70%). While the loss or delay of critical research is serious in itself, it is the other impacts of these reductions and delays –the financial costs, the effects on jobs and careers, and the opportunity costs – that illuminate the real consequences of sequestration.

“For seven decades,” said AAU President Hunter Rawlings, “federally funded university research has produced innovations that have driven the economy, dramatically improved health, and enhanced national security. This research has also made possible the training of generations of American scientists and engineers. But as we cut, and then cut some more, and as our competitors overseas increase their investments in research and education, we create an innovation deficit that threatens America’s global leadership. This foolish policy must end.”

“Nearly six decades ago, we found out suddenly what it felt like to lose a scientific race. When the Soviet Union launched the first satellite in 1957, the faint, distant radio pulses of Sputnik 1 acted as a deafening alarm that woke America up,” said Stony Brook University President Samuel L. Stanley Jr., M.D.  “More than a mere jolt to our national pride, it was clear evidence that a key adversary was paying more attention to science—at least in one emerging area of study—than we were.  Sequestration is today’s Sputnik moment.  Our elected officials must work together to avoid a major setback in the advancement of science and growth of our economy. Research and jobs are depending on them.”

Among the other specific findings of the associations’ survey:

“There is a clear and present danger that sequestration will damage America’s pre-eminence in scientific research and higher education over the long-term,” said Northeastern University President Joseph Aoun on behalf of The Science Coalition. “Given the impact we already have seen, we urge the members of the House and Senate who are negotiating funding for FY2014 and beyond to end sequestration, enable investments in scientific research and higher education, and restore the dividends these investments produce for our economy and society.”

About the Survey: Administrators at the 171 research universities that are members of the AAU, APLU and/or TSC were invited to respond to a survey about the specific impacts of sequestration on their campuses. Of those 171 institutions, 74 completed the survey for a response rate of 43 percent. The margin of error is +/- 10 percent. The survey was conducted after the close of the federal fiscal year so as to capture sequestration’s impact in FY 2013. A summary of survey findings is available at ScienceWorksforUS.org.

For more information on sequestration and its impact on scientific research across the country, visit www.ScienceWorksForUS.org. ScienceWorksForUS is a project of the Association of American Universities (AAU), the Association of Public and Land-grant Universities (APLU) and the Science Coalition (TSC) to demonstrate the tremendous impact that federally funded university based research has on the nation and on the lives of all Americans.