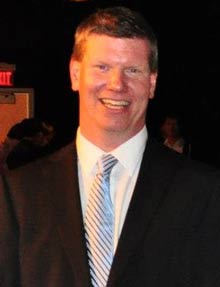 Brian Colle, a Professor in the School of Marine and Atmospheric Sciences (SoMAS) at Stony Brook University, and an expert in coastal meteorology and numerical weather prediction, is a co-principal investigator on the recently funded group of projects entitled “Dynamic Integration of Natural, Human, and Infrastructure Systems for Hurricane Evacuation and Sheltering.” The lead institution is the University of Delaware; other collaborating institutions include Cornell University, University of North Carolina, and the University of Oklahoma.

“October 29, 2013 marks the one-year anniversary of the landfall of Superstorm Sandy and its devastating impacts for the New York Metropolitan Region and Long Island,” said Prof. Colle. “We are eager to advance and the models that will better predict impact and inform important decisions that will help reduce risk to people and property in the future.”

Stony Brook and collaborators are supported with a $3 million grant over four years to develop a new integrated model that simulates hurricanes and associated storm surge, waves, and runoff, which will be ingested into an engineering model to support evacuation decisions. Emergency managers often make initial decisions while a hurricane is still far offshore and large uncertainty remains, and then make subsequent decisions after a day or two has passed as more is known about the likely effects of the storm. The PIs will explore a new paradigm for evacuation modeling that includes temporal decision-making given the probabilistic scenarios that describe the range of ways a hurricane may evolve.

“This is a fundamentally new approach to modeling hurricanes, since it considers the fact that hurricanes are dynamic, and therefore the decision making models also need to consider how people make decisions as storm progresses towards the coast,” said Prof. Colle. “This project requires drawing expertise from the physical modeling of these storms, social sciences to better understand human decision-making, and civil engineers to consider evacuation routes and sheltering options.”

“These models have gotten better in predicting these storms over the years, such as for Sandy, but there can still be large model errors a few days in advance, since we do not exactly know the storm structures when the forecast model is started and there are uncertainties in the representation of the physical processes,” explained Prof. Colle.

As a result, an ensemble of atmospheric model predictions will be created for each storm using slightly different model starting conditions and physical parameters. These 10-20 different atmospheric predictions will be fed into storm surge and hydrologic models to predict coastal and inland flooding, which in turn will drive different scenario evacuation models. Initial case studies will involve some hurricanes that recently made landfall in North Carolina, but this general approach could eventually be applied to other regions, such as the New York City region.