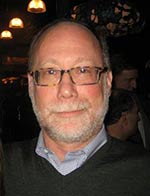 STONY BROOK, NY, December 20, 2013 – The friends and family of Emmy-winning CBS News Producer Michael Rosenbaum have established a memorial scholarship at the Stony Brook University School of Journalism in support of the Marie Colvin Center for International Reporting.

The $30,000 gift from the Michael S. Rosenbaum Foundation will be matched by a special grant from Jim and Marilyn Simons and the Simons Foundation, to establish a $60,000 endowed scholarship.

Michael Rosenbaum had an illustrious 27-year career at CBS, producing for CBS News, 60 Minutes and 60 Minutes II. He served as Tel Aviv bureau chief during the First Palestinian Intifada, collaborating with correspondents Dan Rather and Bob Simon. His field producing during the assassination of Israeli Prime Minister Yitzhak Rabin in 1995 led to the Peabody award and two Emmy awards. He died of a brain tumor in May of 2012. He was 64 years old.

“Our goal in creating the Michael S. Rosenbaum Foundation is to honor and continue Michael’s work with young correspondents, producers and writers,” said Michael’s sister, Judy Witt. “This scholarship will provide students with a unique opportunity through the Marie Colvin Center to do just that, for now and into the future.”

The scholarship will support student journalists who participate in the Marie Colvin Center’s “Journalism Without Walls” program, which takes undergraduates and graduates overseas to report, write and produce print and multimedia journalism. The program has already sent student journalists to China, Russia, Cuba and Kenya. In January 2014, Journalism Without Walls heads to Istanbul, Turkey for a ten-day reporting trip.

“This scholarship was created to honor the memory, values, and ideals of Michael Rosenbaum, who believed deeply in an informed public and a free international press,” said Professor Ilana Ozernoy, Program Director for the Marie Colvin Center for International Reporting. “This generous gift from the Rosenbaum Foundation will support young journalists who embody those ideals in pursuit of their career goals by helping to provide them with international field training.”

“We anticipate that Michael’s legacy of producing journalism that made a difference will not only inspire those students who go overseas, but all of our journalism students,” said Howard Schneider, Dean of the Stony Brook School of Journalism. “It has never been more important to have role models to inspire the next generation.”

Marie Colvin was a Long Island native and acclaimed war correspondent. She was tragically killed in Syria on February 22, 2012, while covering the conflict for The Sunday Times of London. She was known for her moving accounts of innocent civilians caught in the tide of war, and for her courage, tenacity and indefatigable commitment to ground reporting. She grew up in Oyster Bay, not far from Stony Brook University. The Marie Colvin Center was established in 2012 to honor Marie Colvin’s legacy by training the next generation of international multimedia reporters, while fostering proactive and innovative solutions to meet the need for foreign news coverage.

About Marie Colvin
Colvin’s illustrious career spanned 30 years and took her to conflict zones around the globe, including Iraq, Libya, Zimbabwe, Chechnya and Kosovo. In later years, she was recognizable by a trademark black eye patch, which she wore after losing her left eye to shrapnel from an attack by a Sri Lankan soldier. Her experiences were characterized by many dramatic tales – from an eight-day mountain trek with Chechen rebels to her aid in the rescue of 1,500 women and children from a besieged United Nations compound in East Timor – adding up to a remarkable body of work and a singular legacy.