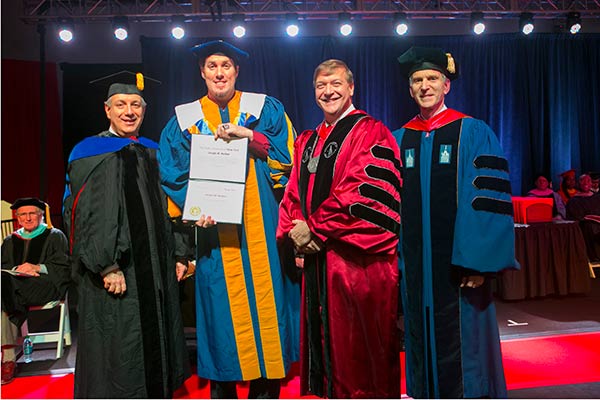 STONY BROOK, NY, DEC. 19, 2013 – Major League Baseball pitcher Joseph M. Nathan, a Stony Brook University alumnus and former Seawolves baseball star, received an honorary degree during the first of two Winter Commencement ceremonies today. “Dr. Nathan,” who recently signed a two-year contract with the Detroit Tigers, and graduated in 1997 with a degree in Business Management, was presented with an honorary Doctor of Humane Letters degree for  “serving as an exemplary role model” and for his “unwavering commitment to Stony Brook University and the Department of Athletics.”

During the ceremony, Nathan was praised for his work ethic, his passion, and his success on and off the field.

“I am blown away,” said the 341-save, six-time Major League All Star pitcher after his degree was made official by SUNY Trustee Cary Staller. “I have been taken aback and humbled by the whole experience.”

Nathan went on to say during his speech that he was not widely recruited to play baseball, and that Stony Brook was “the absolute perfect fit,” and that “coming to Stony Brook was one of the best decisions I ever made in my life.”

In total, 2,244 degrees were conferred at the two separate ceremonies: 1,090 Bachelors; 208 Doctorals; 818 Masters and 128 Certificates. The graduates join the more than 155,000 Stony Brook graduates from around the world who carry on Stony Brook’s mission in both their lives and work.

During his remarks, University President Samuel L. Stanley Jr., MD., urged new Stony Brook graduates to stay in touch with the faculty and staff mentors who made a difference in their education, played a key role in their success, encouraged their interests and awakened a passion for learning.

“Drop them an email or give them a call at some point, let them know how you are doing,” he said.  “Don’t lose these valued mentors. They can continue to play an important role in your life, a wonderful source for counsel, free advice, and those ever so important recommendations.”

President Stanley also touched on the extraordinary diversity that exists at SBU.

“Many schools talk about preparing students to live in a global society, where the ability to understand and appreciate other cultures will be a key to success,” he said. “At Stony Brook we live this every day. It is part and parcel of our experience, and in my opinion, each of you have a very powerful leg up on graduates from other universities as you enter this new global economy.”

The President also highlighted four personal student stories of adversity and achievement, including: Dara Bobb-Semple grew up in Guyana, dreaming of someday becoming a scientist, but had to defer that dream to help work to support her family. When she finally arrived in Stony Brook in 2010 to pursue her studies in chemical engineering, she distinguished herself academically and will be working at Brookhaven National Laboratory and applying for PhD programs in Chemistry;

Cindy Thomas-Charles started her studies at Nassau Community College and went on to participate in the AGEP Summer Research Institute at Stony Brook University. Despite the challenges of maintaining good grades, working part time and supporting her husband through two military deployments, she successfully completed her doctorate in Genetics and is headed to Boston to work at the National Emerging Infectious Diseases Laboratory; Briana Brown graduated at 16 years old from Ramapo High School in Mount Vernon, the first person in her family born in the United

States. Briana took advantage of resources on campus such as WISE and

C-STEP and graduated with a double major in Technological Systems Management and Applied Math and Statistics. She recently accepted a full-time position as Quality Engineer at Sikorsky Aircraft; and, Patrick Harris, a U.S. Marine Corps veteran and first generation college student. Patrick earned college credit for his military and life experience, and started college in earnest in 2011; he got his bachelor’s degree from Empire State College in 2012 and graduated today with a Master of Arts in Higher Education Administration, setting the groundwork for his interest in advising and higher education administration while working as a college prep consultant for the past five years with high school students in Riverhead.

Two new graduates, winners of the traditional Speech Writing competitionheld by the Dean of Student’s Office, were given their moment in the spotlight to address their fellow graduates.

Student Taimy Thomas, 21, a Biology major and resident of Sparkill, New York, spoke at the morning ceremony and thanked her fellow graduates for making her four years at Stony Brook University the “best years” of her life. She recalled the many bonding experiences among the campus community that helped to shape her as a person.

“Being here has taught me about finding true friends and the importance of listening to the ideas around me. I have seen the benefits of hard work and the trouble with cramming, and I have seen the heart of our campus when so many students gathered together to give a Dunkin Donuts worker a heartfelt thank you. It was experiences like flooding Dunkin Donuts with thank you cards and cheers that makes me believe that this school is fantastic. The campus community has been so welcoming and has always stood strongly for what they believed was right, and that is one of the things that made us better.”

Student Tyler Rose Abruzzo, 22, a School of Marine and Atmospheric Science major and a resident of West Babylon, spoke at the afternoon

ceremony. She called on her fellow graduates to rise to the challenge of a tough job market, armed with the problem solving skills that they have learned at Stony Brook.

“Stony Brook classes have pushed me to go beyond my comfort zone and I know most of my fellow peers can say the same. Many of us in high school got by just by memorizing useful facts and regurgitating them onto paper. Our Stony Brook degree has been so much more than that. Stony Brook wanted us to look outside the box. They did not simply ask us to memorize facts, they wanted us to apply those facts to worthwhile, real-world dilemmas. In essence, we developed realistic problem solving skills. This is what sets us apart from the rest,” Abruzzo said.