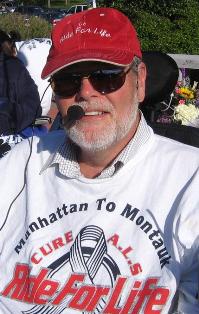 STONY BROOK, N.Y.
, December 14, 2010  – For Chris Pendergast, every Christmas he has been alive to celebrate with his family for the past 17 years has been a gift unto itself. Indeed, in 1993 the then 44-year-old elementary school teacher from Miller Place on Long Island was diagnosed with amyotrophic lateral sclerosis – ALS – the always fatal degenerative neuromuscular disease commonly known as Lou Gehrig’s Disease. He was told that he had, at best, three to five years to live.

This Christmas, however, Chris is being given a present that will transcend his life while benefiting countless others who suffer from the dreaded and horrific disease for generations to come. In a ceremony on Thursday, December 16, Stony Brook University Medical Center (SBUMC) will rename and dedicate its ALS clinic as the Christopher Pendergast ALS Center of Excellence, an ALS Association Certified Center.

The event, which begins at 1 p.m. at SBUMC, will feature the participation of Stony Brook University leadership, ALS Center physicians and staff, and Dorine Gordon, president of the ALS Association of Greater New York. David Cone, the former New York Yankees perfect game pitcher who is the honorary chairman of the Ride for Life Foundation, will be the special guest at the ceremony.

Being the recipient of such a gift is actually a role reversal for Chris. For the past 17 years, he has actually been the one giving the gifts to those with ALS. Each May, on behalf of his Ride for Life Foundation and accompanied by other patients and supporters, he makes a power wheelchair ride of more than a hundred miles from Montauk to Manhattan’s Columbia University, where New York Yankees legend Lou Gehrig went to college. In so doing, he has raised well in excess of $3.5 million for ALS research and patient services.

At SBUMC, Chris was the major force behind the opening of the ALS clinic there in 2002 – the only one on Long Island and one of only 34 certified by the ALS Association nationwide. And he has donated about $400,000 to the clinic for its wide-ranging services, from respiratory, physical, occupational and speech therapies to psychological and nutritional services.

In fact, it is Chris’ advocacy and his inspiration that made SBUMC want to name the clinic after him, according to CEO Dr. Steve Strongwater.

“A lot of people are indebted to Chris for helping create the ALS Clinic,” Strongwater says, noting that Chris is one of the rare long term ALS survivors in the world and one of the few patient spokesmen for the disease, which affects about 30,000 people in the U.S. There are about 5,000 new diagnoses annually.

“He’s an inspiration, not only for the patients and the families, but even for me as a doctor,” adds Dr. Rahman Pourmand, who is the clinic’s director and Chris’ neurologist for the past six years.

In typical humble fashion, Chris – who speaks slowly and sometimes needs a ventilator to breathe – doesn’t see himself as special, just “doing what anybody in my position would do….I’ve taken it one day at a time and those days have led me on an amazing journey.”