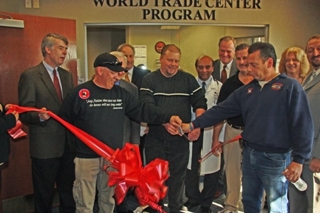 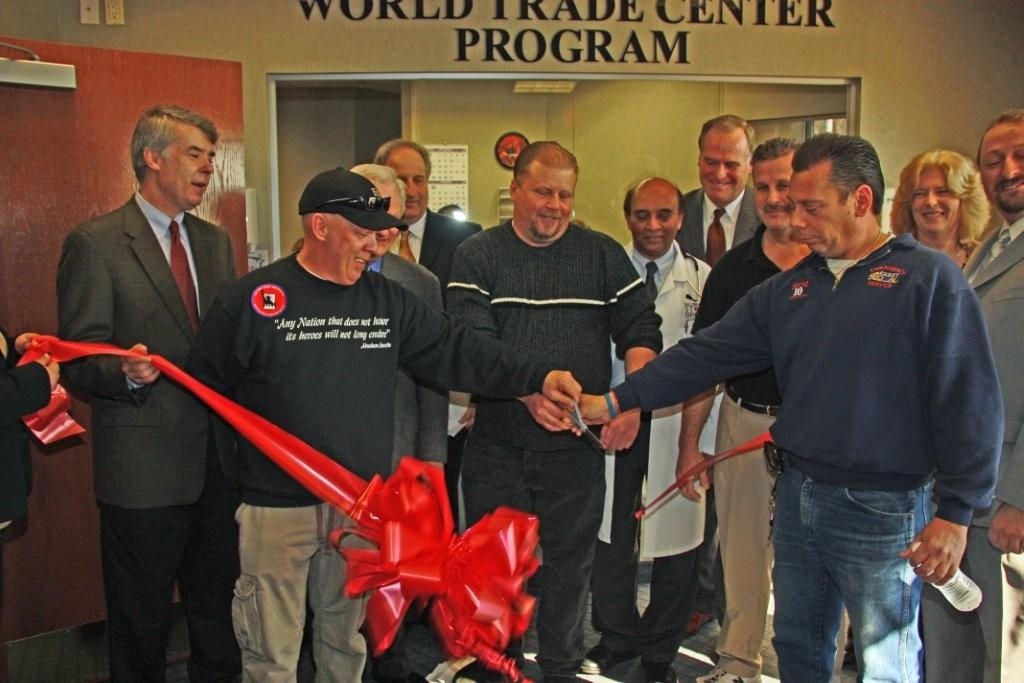 STONY BROOK, NY-December 12, 2009- Stony Brook University Medical Center has opened a new and expanded World Trade Center Medical Monitoring and Treatment Program (WTCMMTP) facility to care for thousands of 9/11 first responders who continue to suffer from asthma, pulmonary conditions, post-traumatic stress disorders, and other conditions related to their work at ground zero. The WTCMMTP medical staff, patients, and government officials attended a ribbon cutting of the state-of-the-art facility in Islandia, N.Y., on December 3.

In operation since immediately after 9/11, the WTCMMTP is a federally funded program largely supported by the National Institute for Occupational Safety and Health (NIOSH), an arm of the Centers for Disease Control. With an annual budget of more than $8 million, the SBUMC program to date has cared for approximately 5,000 Long Islanders and 9/11 first responders, including police officers, firefighters, and construction workers. The program assists 25-to-30 new patients on average each month.

“We all recollect the horror of September 11, 2001, but out of the aftermath came an army of common people, who were anything but common,” said Benjamin J. Luft, M.D., Medical Director of the WTCMMTP. “Tens of thousands came, policemen, fireman, laborers, fathers, and mothers, young and older adults. They came first to rescue then to recover. We decided to dedicate ourselves to the care of those who valiantly responded,” explained Dr. Luft, referring to the need for the medical monitoring program and its subsequent growth.

“I am not sure where I would be in life without the Stony Brook doctors and other medical professionals who have cared for me through the medical monitoring and treatment program,” said Mike Valentin, a disabled New York Police Department detective at the ceremony. Valentin has multiple and chronic health conditions resulting from his many hours of work at ground zero that lasted for months after the attacks. “We don’t know what all the long-term health effects from our exposures will be, which is another important reason why this medical program needs to continue for many years to come.”

The new facility is a permanent home for the WTCMMTP and has double the clinical space than the previous location in Suffolk County. There are also additional patient consult offices, as well as more space for administration and collaboration among on-site SBUMC physicians and other healthcare professionals. The program also has two satellite offices on Long Island, one in East Meadow and another in Hicksville.

Dr. Luft described his work at the WTCMMTP as the most satisfying part of his medical career. He emphasized that all who work at the center, from the receptionists who greet patients, to the social workers, nurses and physicians, are all part of a unique coordinating healthcare team with a mission to treat the many conditions and diseases experienced by first responders and prevent other health problems. He says all personnel receive special training. The program is equipped to help patients with specialists in areas such as pulmonology, psychiatry, radiology, orthopedics, neurology, gastroenterology, radiology, and neurology.

Stony Brook’s WTCMMTP is part of a consortium of healthcare institutions in the tri-state area dedicated to screening eligibility of 9/11 first responders and providing medical monitoring and treatment. There are a total of eight clinical locations, including the three on Long Island through the SBUMC program. More than 20 physical and medical conditions have been identified as related to work at ground zero. For more information about the consortium and program, see http://www.wtcexams.org/index.html