Team of Researchers Find Evidence of Fire in Antarctic Ice 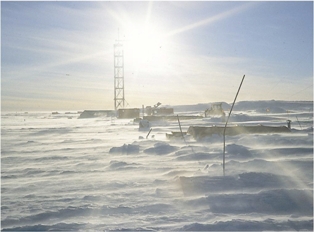 Team of Researchers Find Evidence of Fire in Antarctic Ice

General view of the drill site D47, Antarctica, where the LGGE (Laboratoire du Glaciologie et Geophysique de l’Environnement) team drilled one of two cores used in this study. The thermal drilling method allowed for the collection of a 12cm diameter core, from which CO and its isotopes were measured at Stony Brook University. These analyses required close to 1kg ice per sample. (Photo credit: Jerome Chappellaz, CNRS/LGGE)

in the Southern Hemisphere over the past 650 years.

In an article published Dec. 2 in the early online version of the journal
Science
entitled “Large Variations in Southern Hemisphere Biomass Burning During the Last 650 Years,” John E. Mak, Associate Professor at Stony Brook’s Institute for Terrestrial and Planetary Atmospheres in the School of Marine and Atmospheric Sciences, and co-authors Jerome Chappellaz, Laboratory for Glaciology and Geophysics of the Environment, CNRS (Centre National de Recherche Scientifique), Grenoble, France; Zhihui Wang (formerly a Stony Brook PhD student, now a postdoctoral scientist); and, Key Hong Park (currently a PhD student at Stony Brook), found that traces of carbon monoxide isotopes in the ice samples show that the amount of biomass burning – fires fueled by plant materials such as wood, peat and grasses resulting from natural forest fires and man-made cooking and communal fires – did not gradually rise over time, but rather rose and fell across the centuries.

“It was a big surprise. We certainly weren’t looking for that,” said Professor Mak. “It’s kind of a mystery.”

While the  biomass burning trends were similar to those found in previous studies that measured other tracers of  biomass burning, this was the first study to measure variations in stable isotopes of carbon and oxygen, the first such measurements for carbon monoxide collected from ice core samples. The results indicated “that large variations in the degree of biomass burning in the Southern Hemisphere occurred during the last 650 years, with a decrease by about 50% in the 1600s, an increase of about 100% by the late 1800s, and another decrease by about 70% from the late 1800s to present day.” The evidence suggests that there was less biomass burning in the 20th century than in the century to century-and-a-half preceding it.

“One might think there should clearly have been more biomass burning in the Southern Hemisphere during the Industrial and post-Industrial eras. It seems logical to conclude that,” Dr. Mak said. However, both the CO measurement study and previous studies that measured charcoal particles in sediment and methane in trapped ice in the Southern Hemisphere have pointed the other way. The research team studied two ice cores from two different locations in Antarctica.

Part of the State University of New York system, Stony Brook University encompasses 200 buildings on 1,450 acres. In the 53 years since its founding, the University has grown tremendously, now with nearly 25,000 students and 2,200 faculty and is recognized as one of the nation’s important centers of learning and scholarship. It is a member of the prestigious Association of American Universities, and ranks among the top 100 national universities in America and among the top 50 public national universities in the country according to the 2010 U.S. News & World Report survey. Considered one of the “flagship” campuses in the SUNY system, Stony Brook University co-manages Brookhaven National Laboratory, joining an elite group of universities, including Berkeley, University of Chicago, Cornell, MIT, and Princeton that run federal research and development laboratories. SBU is a driving force of the Long Island economy, with an annual economic impact of $4.65 billion, generating nearly 60,000 jobs, and accounts for nearly 4% of all economic activity in Nassau and Suffolk counties, and roughly 7.5 percent of total jobs in Suffolk county.