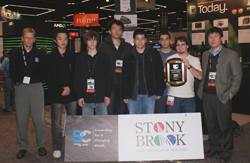 
Teams taking part in the Student Cluster Competition were charged with showing a proficiency in two categories – specialized benchmarking and use of specific scalable scientific applications. Students were asked to efficiently integrate and install the cluster application using vendor-sponsored hardware. The project had to be achieved while working under the constraints of limited power of no more than 3120 Watts (120 volts and 26 amps).

Professor Jim Jiao of the Applied Mathematics and Statistics Department took on the role of faculty coach for the team.

“It was incredibly exciting to win,” Pellman-Isaacs said. “The conference itself is staggering in scope and scale. Winning was a gratifying confirmation of the ability of Stony Brook students to work together. The dedication was remarkable and I was proud to have them as a team.”

Stony Brook edged out three formidable teams in the final of the SC09 Student Cluster Competition — Purdue University, the University of Colorado, and Arizona State University.

“The feeling of winning was pretty intense because I felt like it was a very close competition,” Chan said. “All of the teams were putting in a lot of effort pulling all-nighters. I was pretty nervous when they were about to announce the winners. I just didn’t expect the victory.”

Among the many challenges the Stony Brook team had to deal with was when one of their initial hardware vendors backed away from the project a month before the Portland conference. Fortunately, Dell stepped in to provide the team with hardware a week before they left for Portland.

In earning first place, judges complimented the Stony Brook team for their overall body of work, and in particular cited the SBU team for their ability to excel in applications runs as well as for the presentation and visualization of their results.

“The students worked very hard during the competition, which lasted three days,” Jiao said. “They slept very little, but always maintained high spirits. They coordinated very well in the running of the applications, resolving unexpected hardware failures, and also in post-processing the results of the application runs. Their incredible efforts led to the winning of our team.”

The Supercomputing Conference (
sc09.supercomputing.org
), which boasted a “Go Green!” theme this year, is a comprehensive symposium that highlights high-performance computing, networking, storage and analysis. The conference is considered the biggest international convention of its type and attracts over 11,000 researchers, scientists, engineers and computer experts.