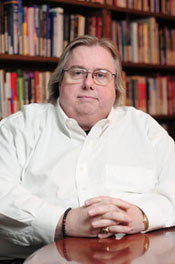 Frey, Galson, Lynch and McGovern to be honored at campus ceremony tomorrow

STONY BROOK, NY — November 19, 2009 – The Stony Brook Alumni Association has named four Stony Brook University graduates as recipients of the 2009 Distinguished Alumnus Awards, the Association’s highest honor. The recipients will be honored at a special ceremony and dinner tomorrow Friday, November 20, 2009 at the University’s Charles B. Wang Center.


Dr. Robert J. Frey is the President and CEO of Harbor Financial Management, LLC in Port Jefferson, NY.   In addition, he is a Research Professor at Stony Brook University in the Applied Mathematics and Statistics department and also an Adjunct Professor at the University of Chicago’s Department of Mathematics.  Frey spent 15 years in quantitative finance as a Managing Director at Renaissance Technologies Corporation, where he retired in 2004. Frey earned his BS in Applied Mathematics and Statistics in 1980 and his PhD in the same discipline in 1987. He is a resident of Port Jefferson, NY.

Rear Admiral Steven K. Galson, M.D., M.P.H., has served as the Acting Surgeon General of the United States since October 2007 and most recently in January 2009 was named Acting Assistant Secretary for Health.  Additionally, he serves as the operational Commander of the Commissioned Corps of the United States Public Health Service (PHS), a uniformed force of 6,000 health professional officers dedicated to promoting, protecting, and advancing the health and safety of the people of the United States. Dr. Galson received his BS in biochemistry from Stony Brook in 1978. He lives in Chevy Chase, MD.


Dr. Sally A. Lynch is the Vice President of General American Investors Co. Inc. and is responsible for securities in the biotechnology and pharmaceutical industries. She earned her BS in Biological Sciences in 1982 and her PhD from the Department of Molecular Genetics & Microbiology in 1988, both from Stony Brook University. Following graduation, she was a postdoctoral fellow and research assistant in the division of Solid Tumor Immunobiology at Memorial Sloan-Kettering Cancer Center. Dr. Lynch splits her time between New York City and Old Field, NY where she established and operates a nonprofit to restore historic Old Field Farm County Parkland as a venue for equestrian and community-related activities.

Dr. Margaret M. McGovern is the Chair of the Department of Pediatrics at Stony Brook University Medical Center. She received her BS in Biology from Stony Brook in 1978 and subsequently earned her PhD degree in Genetics from the Mount Sinai School of Biological Sciences program and her MD from the Mount Sinai School of Medicine. She is a board certified Pediatrician, Clinical Geneticist and Molecular Geneticist.  Dr. McGovern is an NIH funded clinical investigator and has served on numerous national committees including the Food and Drug Administration, the Centers for Disease Control and Prevention, and the New York State Task Force on Life and the Law.  Dr. McGovern lives in Huntington, NY.


Established in 1983, the Distinguished Alumnus Awards (DAA) recognize and pay tribute to outstanding Stony Brook University alumni who have demonstrated extraordinary commitment to the University, have exceptional achievements, and careers that reflect “the highest values embraced and promoted by both the State University of New York at Stony Brook and the Stony Brook Alumni Association.”

For additional information regarding the 2009 Distinguished Alumnus Awards ceremony and dinner, please call 631-632-4466 or visit:
www.stonybrook.edu/daa.

The Stony Brook Alumni Association in an independent 501(c)(3) organization that represents more than 130,000 Stony Brook University alumni nationwide and abroad. Established in 1965, the Association seeks to reach, serve and engage all alumni, students, and other constituencies to foster a lifelong intellectual and emotional connection between the University and its graduates, and to provide the University with goodwill and support.

Part of the State University of New York system, Stony Brook University encompasses 200 buildings on 1,600 acres. In the 50 years since its founding, the University has grown tremendously, now with nearly 24,000 students and 2,100 faculty, and is recognized as one of the nation’s important centers of learning and scholarship. It is a member of the prestigious Association of American Universities, and ranks among the top 100 national universities in America and among the top 50 public national universities in the country according to the 2008 U.S. News & World Report survey. Considered one of the “flagship” campuses in the SUNY system, Stony Brook University is a driving force of the Long Island economy, with an annual economic impact of $4.65 billion, generating nearly 60,000 jobs. Stony Brook accounts for nearly 4% of all economic activity in Nassau and Suffolk counties, and roughly 7.5 percent of total jobs in Suffolk County.