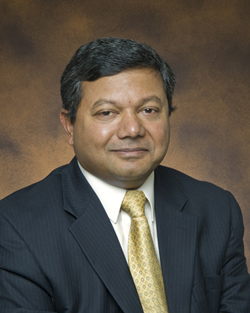 Majumdar was confirmed by the Senate last month as the first Director of the Advanced Research Projects Agency – Energy (ARPA-E), the country’s only agency devoted exclusively to transformational energy research and development. The agency was authorized by the America Competes Act in 2007 and is modeled after the military’s Defense Advanced Research Projects Agency (DARPA).

“We are thrilled to have Dr. Majumdar as our guest at the conference,” said Yacov Shamash, Co-Chair of the Advanced Energy Conference and Vice President of Economic Development at Stony Brook University. “His work at Berkeley Lab as both an academic and administrator and his ability to translate science to the marketplace make him a true visionary.”

“We are on a mission in this country and in the state of New York to implement Smart Grid technology and develop new resources for clean energy,” said Stony Brook University President Samuel L. Stanley, Jr., MD. “With the Department of Energy, and the Advanced Research Projects Agency – Energy moving forward with project funding, we will see great things in the months and years to come, and I think Dr. Majumdar will give us a preview of that.”

Prior to joining ARPA-E, Majumdar was the Associate Laboratory Director for Energy and Environment at Lawrence Berkeley National Laboratory and a Professor of Mechanical Engineering and Materials Science and Engineering at the University of California, Berkeley.  His highly distinguished research career includes the science and engineering of energy conversion, transport, and storage ranging from molecular and nanoscale level to large energy systems.  In 2005, Majumdar was elected a member of the National Academy of Engineering for this pioneering work.

A native of India, Majumdar is an entrepreneur and has served as an advisor to startup companies and venture capital firms in the Silicon Valley.  He received his bachelor’s degree in Mechanical Engineering at the Indian Institute of Technology, Bombay in 1985 and his Ph.D. from the University of California, Berkeley in 1989.

The Advanced Energy Conference is coordinated by the
Advanced Energy Center
(AERTC) located at the Stony Brook Research and Development Park. The annual conference is a convergence of  leading researchers, government officials, policy makers energy providers, along with leaders from the business, education and non-profit sectors.

For a complete schedule of the Advanced Energy Conference or to register, go to the conference website at
www.aertc.org/conference09
.