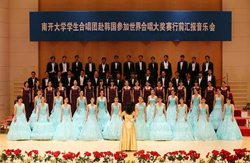 
STONY BROOK, N.Y., November 10, 2009 – On December 1st, 2009, at 7:00 P.M. the Confucius Institute at Stony Brook University (CISBU) will host China’s award-winning Student Choir of Nankai University at the Charles B. Wang Center.  Having performed at top concert venues around the world, the Student Choir of Nankai will present Stony Brook University and the surrounding community with a diverse repertoire of Chinese and Chinese minority folk classics.


Officially founded in 1995, the Student Choir of Nankai University is composed of undergraduate and graduate students.  Following a prestigious choral tradition at Nankai University, dating back to the 1930s, the Student Choir has won various major international choral awards, including the highest award at the Fourth International Choral Festival in 1998, three gold medals at the Third World Olympic Choral Competition in Bremen, Germany and top prizes at the First and Second National College Student Performance Festivals in China.  In 2009, the Student Choir performed on the stage of China’s National Grand Theatre, representing the highest honor of national recognition in China.

The event is open to the public, at no charge, and will take place at the Charles B. Wang Center Theater, on Stony Brook University campus, on December 1st at 7:00 P.M.

If you would like more information about the Student Choir of Nankai University event or the Confucius Institute at Stony Brook, please contact Jesse Heatley by email at
jheatley@notes.cc.sunysb.edu.
– See more at: http://commcgi.cc.sunysb.edu/cgi-bin/am2/admin.cgi#sthash.SaLXS6EK.dpuf