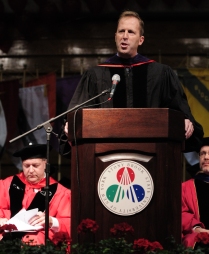 STONY BROOK, NY, October 30, 2009 – Kevin Law, President and CEO of the Long Island Power Authority (LIPA), loved his undergraduate years as a Political Science major at Stony Brook University. Now, more than 25 years later, he is coming back to campus in a very different capacity.

Kevin Law, Chair of the Stony Brook Council, during his remarks at the Inauguration of President Samuel L. Stanley, Jr., M.D.

The St. James, New York resident has been appointed Chairman of the Stony Brook Council by Governor David A. Paterson, a board that serves as an oversight and advisory body to the campus and to Stony Brook’s president and senior officers. Law succeeds Richard T. Nasti (SBU Class of ’78), who served as Council Chair from 1995 through June 2009.

In accordance with New York State Education Law, the Stony Brook Council comprises ten members; nine who are appointed to seven-year terms by the Governor of the State of New York, and one student member elected in alternating years from among the campus’ undergraduate and graduate students.

“Since I’m an alumnus and was very fond of my professors, this is a great way to give back to a place that helped get me where I am today,” said the 49 -year-old Law, who majored in political science and counts renowned faculty members Lee Koppelman, Mark Schneider
and Helmut Norpoth among his mentors. “Plus, it’s difficult to say no when the Governor asks you to do something.”

“There is no reason that Stony Brook can’t continue to fulfill the original vision set forth by then Governor Rockefeller upon establishing the university to stand with the finest in the land,” said Law, citing the achievements made under the tenure of immediate past president Dr. Shirley Strum Kenny and the steps already being taken by new president Dr. Samuel L. Stanley, Jr. “We can be the Berkeley of the East, and I’m confident that Sam will take us there.”

“I have already had several opportunities to consult and work with Kevin and each time I came away impressed by his wise counsel, his keen intellect, and his far-reaching vision for Stony Brook,” said Stanley. “His passion for his alma mater is evident and contagious and the respect and admiration he has in the community is well-earned. So I’m confident that his leadership of the Council will result in significant achievement for the University.”

“I am very pleased by the appointment of Kevin Law,” said Richard Nasti who is now serving as a board member of the Stony Brook Foundation. “Kevin is a successful alumnus who has a demonstrated commitment to Stony Brook. He will be an invaluable asset to Stony Brook as it continues its ascendancy in the ranks of major research universities.”

“I have come to know Kevin Law over the past several years and am very pleased at his appointment as Chair of the Stony Brook University Council,” said Michael Russell, Trustee, State University of New York. “Kevin is highly thought of in all circles of New York State Government and Private Industry. His experience working with elected officials on all levels will serve Stony Brook University well. I am sure that his business acumen will aid President Stanley in his quest to make this university the best that it can be.

“I had concerns that Rick Nasti’s successor could not duplicate what Rick had accomplished during his long tenure as Chair,” Russell continued. “However, Kevin is the right person to help lead Stony Brook to a loftier position among AAU schools. I welcome Kevin to Stony Brook.”

“I had the great pleasure of working with Kevin when he served as Chief Deputy County Executive for Suffolk County,” said Cary Staller, Trustee, State University of New York. “I have always been impressed with his intelligence and integrity. Stony Brook University is fortunate that Kevin is able to serve in this important capacity.”

Law was appointed President and CEO of LIPA, the second largest public utility in the country with over 1.1 million customers, by unanimous vote of the Authority’s Board of Trustees on October 2, 2007. Prior to his approval as President and CEO, he served as a LIPA Trustee and Chairman of its Board beginning in January 2007.

Demonstrating keen vision and leadership in the areas of energy efficiency and renewable energy, Law launched Efficiency Long Island, the largest energy efficiency program for any public utility in the country, procured a 50MW solar energy project, the largest solar project in New York State, introduced “smart meters” on Long Island, and is exploring an offshore wind project with Con Edison, which could be the largest offshore wind project in the country.

Previously, Law served as Chief Deputy County Executive and General Counsel for Suffolk County, New York, the ninth largest county in the country with a population of 1.4 million people. In this capacity, he had direct oversight of all county departments consisting of over 12,000 employees and a $2.7 billion budget.

Prior to his tenure in Suffolk County, he was the Managing Partner of the Long Island office of Nixon Peabody LLP, a national law firm with over 800 attorneys. Law focused his practice in matters relating to all facets of energy, where he worked on many of the largest energy projects on Long Island, environmental, land-use, real estate, municipal litigation, and representation of clients before federal, state and local agencies.

Law has also been the Director of Real Estate for the Suffolk County Department of Law, where he administered the Pine Barrens, Open Space and Farmland Preservation and Acquisition Programs. Earlier in his career, he was the Assistant Suffolk County Executive for Planning, Housing and Environmental Affairs, where he coordinated the County Executive’s environmental initiatives and affordable housing programs. Law worked also for the New York State Assembly.

He received an Associate of Arts from Suffolk County Community College; Bachelor of Arts from Stony Brook; a Master of Science from the Graduate School of Urban Affairs and Planning at Hunter College of CUNY; and his Juris Doctor from St. John’s University School of Law.

Law sits on Governor David A. Paterson’s Renewable Energy Task Force and on his New York State Economic Recovery and Reinvestment Cabinet formed to manage the development of State and local infrastructure projects financed through the federal American Recovery and Reinvestment Act. He is also a Steering Committee member of the Alliance to Save Energy’s Clean and Efficient Energy Program (CEEP) for public power.

Law and his wife Elizabeth reside in St. James and have two boys, Gregory, 8, and Matthew, 11.