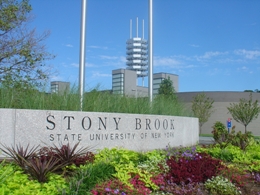 University among nation’s leaders in developing researchers of the future; sphere of impact expanding around the country

STONY BROOK, NY, October 27, 2011 – Eleven regional finalists and 31 semifinalists in the Siemens Competition — one of the top nationwide research competitions for high school researchers — were mentored at Stony Brook University, ranking among the leaders in universities nationwide who mentor high school researchers from Long Island and out of state.

Many of the competition finalists and semifinalists participated in summer research programs offered at Stony Brook, such as the Garcia Center for Polymers at Engineered Interfaces program and/or the Simons Summer Research Program, including students from California, Michigan, New Jersey, Pennsylvania, Virginia and Washington State.

“Faculty and graduate students from Stony Brook University selflessly give of their time and resources to aspiring high school student researchers like no other institution in the world,” said President Samuel L. Stanley Jr., MD. “This is a phenomenon that continues to amaze me, and on behalf of the University, I am proud to support and encourage our work with these emerging young scientists.”

Regional finalists will compete in one of 6 regional competitions during November; and winners of the regional events will compete at the National Finals in Washington, DC, in early December for the top prize of $100,000. In previous years, grand prize winners in both individual (2009) and team categories (2001, 2007) worked with Stony Brook faculty mentors including, Carlos Simmerling and Iwao Ojima of the Department of Chemistry; and Miriam Rafailovich of the Department of Materials Science & Engineering. Click here to view the listing of the Siemens regional and semifinalists and their mentors.