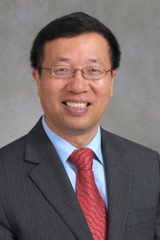 Dr. Zhang has more than 25 years of experience in the field of atmospheric sciences, the last 23 at Stony Brook University. He began his career as a Research Assistant Scientist at the Institute of Atmospheric Physics at the Chinese Academy of Sciences before joining Stony Brook as a postdoctoral scholar in 1988. He later became an Assistant and Associate Professor, then Professor and Director of the Institute for Terrestrial and Planetary Atmospheres. In 2003, Zhang was named Associate Dean of SoMAS, a position that he held until assuming the role of Interim Dean in June of 2010. He is also the Director of the Marine Sciences Research Center.

Dr. Zhang earned his BS and MS in Atmospheric Sciences at Nanjing University of Information Science and Technology, People’s Republic of China. He received his PhD at the Institute of Atmospheric Physics at the Chinese Academy of Sciences. He has authored or co-authored more than 90 papers and a book on climate science. His research is focused on numerical modeling of climate and global climate change, and the dynamics of large-scale atmospheric waves – their excitation, propagation, dissipation, and influences on the variability of atmospheric circulation.

“Stony Brook University is excited that Minghua has accepted the appointment as Dean of SoMAS,” said Dennis N. Assanis, Provost and Senior Vice President for Academic Affairs. “Under his direction, we look forward to continuing our role as a vast resource for education, research and discovery in the marine and atmospheric sciences. His background, experience and international recognition are a tremendous asset to the University.”

Dr. Zhang has been recognized by the international community for his work on the United Nations Intergovernmental Panel on Climate Change (IPCC), a group that shared the 2007 Nobel Peace Prize with former Vice President Al Gore. The group received the Nobel for their collective efforts in raising awareness about manmade climate change and laying the foundation to counteract it. He was one of four Stony Brook University atmospheric scientists who shared the prize.

“I am honored to have the opportunity to direct one of the nation’s leading marine and atmospheric sciences programs,” said Dr. Zhang, who oversees approximately 90 faculty and staff members from 16 different nations. “We look forward to continuing to lead the way in advanced research, education and public service.” He noted that faculty members, internationally known for their leadership in research in both the atmospheric sciences and all major disciplines of oceanography, are at the forefront of answering questions about regional environmental concerns, and fundamental processes in atmospheric and ocean systems. They are also engaged with students in the latest laboratory and field study research on a local, national and global level.

SoMAS has more than 500 undergraduate and 150 graduate students pursuing their MA, MS or PhD degrees in Marine and Atmospheric Sciences, with a concentration in either discipline, as well as an MA in Marine Conservation and Policy. Currently there are more than 700 SoMAS Graduate School alumni around the globe, most of whom hold positions in fields associated with marine and atmospheric sciences.

SoMAS operates research and educational facilities at the SBU main campus, Stony Brook Southampton (including the Southampton Marine Station) and the Flax Pond Marine Laboratory on the Long Island Sound. The school’s location allows students and faculty the opportunity to explore and study a variety of habitats, as well as utilize the resources from Brookhaven National Laboratory and the Laboratory at Cold Spring Harbor.