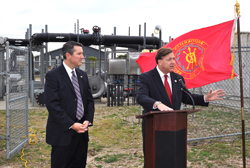 
FARMINGVILLE & STONY BROOK, NY, October 8, 2010 – Supervisor Mark Lesko and Stony Brook University President Samuel L. Stanley, Jr., M.D., announced that the Town of Brookhaven has become the newest member of the University’s National Science Foundation (NSF) Center for BioEnergy Research and Development (CBERD). This new partnership is expected to be very beneficial for the Town’s landfill gas management program by increasing its potential as an energy and revenue source. Also present were Stony Brook Professor Devinder Mahajan, a Professor in Materials Science and Engineering who also serves as the Co-Director of the Chemical and Molecular Engineering Program, and David Tonjes, Assistant Professor in the Department of Technology and Society.

Supervisor Lesko and Dr. Stanley explained how Stony Brook CBERD will be developing technology to clean the biogas emitted from Cells 5 and 6 of the landfill so it can be used to produce electricity. Currently, the biogas (which has a high methane content) that is emitted from Cells 5 and 6 cannot be used to produce electricity because it is highly corrosive due to contaminants (such as hydrogen sulfide). Stony Brook’s CBERD will examine the biogases that Cells 4, 5 and 6 emit, and the goal is to convert it into a gas that can be readily combusted and used to generate electricity. The Town estimates that the current combustible biogas volume from Cell 5 and 6 is 350 cubic feet per minute which represents a potential 10 million kilowatt hours (KWH) of electricity per year.

According to Professor Mahajan, Director of the Stony Brook CBERD who’s lab is working on the Town’s landfill gas management program, biogas is naturally produced in landfills by the action of microorganisms on organic matter. However, he said, this fugitive methane is slowly emitting in the atmosphere worldwide.

“Methane is 17 times more potent than greenhouse gas,” he said, “and naturally produced biogas contain, among other impurities, sulfur compounds that are toxic and corrosive, and CO2 that has no heating value.”

The Stony Brook CBERD has also applied to the Environmental Protection Agency with the Town for a grant to improve international landfill practices. The Town landfill would serve as a model for best available practices to be used in training managers from the Shanghai Laogang landfill and students from Tongji University in China.

“This partnership clearly demonstrates how the Town is working to make the Landfill a more environmentally friendly facility. I thank Dr. Stanley and the University’s Center for BioEnergy Research and Development for selecting Brookhaven Town to participate in this partnership,” said Supervisor Lesko. “The result of the research conducted at the Town landfill could be an international model.”

“This great collaboration and the work being done by the Stony Brook University’s CBERD and the Town of Brookhaven to convert methane biogas to electricity with new technology is truly revolutionary,” said President Stanley. “As this technology is refined, it has the potential to benefit not only the Town of Brookhaven, but the entire Long Island community, and application potential at landfill sites around the country and throughout the world.”

“Technologies exist to clean up biogas to make it pipeline-quality gas,” said Yacov Shamash, Dean of the College of Engineering and Applied Sciences and Vice President for Economic Development at Stony Brook University, who is also a director of the Advanced Energy Research and Technology Center. “Stony Brook’s CBERD under Professor Mahajan’s leadership is developing the next-generation technology to economically extract methane from biogas.”

Councilman Tim Mazzei, who serves as Town Board liaison to the Brookhaven Landfill said, “Our landfill is a tremendous asset to the Town and we must continue to explore new ways to run it more efficiently, increase revenue and protect the environment. I expect that the research done here will have a significant impact in the years to come.”

Deputy Supervisor / Councilwoman Kathleen Walsh said, “It’s clear we should be exploring ways in which to fully utilize the resources available within our landfill. This partnership into the further development of its potential for renewable energy technologies demonstrates the Town’s intent to provide an environmentally friendly facility while significantly reducing the expense bestowed upon our taxpayers.”

In 1983, the Town of Brookhaven began generating electricity from biogas produced from older cells in the Brookhaven landfill. Since 1983 approximately 340,000,000 KWH of electricity have been produced. This is roughly equivalent to 200,000 barrels of oil and the amount of power needed for 30,000 homes. Furthermore, since 1983, the Town of Brookhaven has received approximately $2.5 million in rental and production payments associated from Wehran Energy Corp, who converts the biogas into energy through turbines and sells it to LIPA. The peak annual production of 24 million KWH occurred in 1998 and 1999 and has declined since then.

The older cells of the landfill (Cells 1-3) received municipal solid waste and the biogas produced from these cells were cleaner and could be more easily converted into electricity.

Newer cells dating back to 1991 have received construction and demolition debris and ash, which produce a biogas containing other non-flammable and corrosive gas components. Currently, these gases are burned off in a flare. They would need to be upgraded before they could be used as a fuel for an electrical generator. – See more at: http://commcgi.cc.sunysb.edu/cgi-bin/am2/admin.cgi#sthash.xtWVqTTv.dpuf