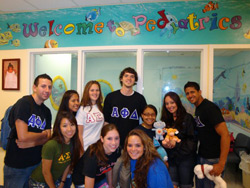 
STONY BROOK, N.Y., October 7, 2009 — Dealing with cancer is an overwhelming experience for anyone.  Imagine going through it as a child.


On Saturday, October 10, 2009, for the second consecutive year Alpha Phi Delta Fraternity and the greater Greek community at Stony Brook University is hosting a charity softball tournament to benefit The Sunrise Fund at the Stony Brook University Medical Center. The Sunrise Fund helps underwrite important research and leading-edge clinical care, provides school re-entry programming and many other vital services for pediatric cancer patients and their families.

Last year, the First Annual APD Fall Classic brought for teams composed of eight different Greek organizations and more than 125 attendees together under a single cause with their efforts resulting in more than $4,000 raised for the designated charity.  The event was sponsored by such companies as Pepsi, Metromint, Dunkin Donuts, and Collegiate Greek.

The APD Fall Classic is dedicated to not only collecting donations for and raising awareness of the Sunrise Fund, but also to the greater collaboration and unification of the Stony Brook community.


In this light, the Second Annual APD Fall Classic will include contributions from 21 different Stony Brook entities, whether they’re faculty departments, athletic teams, or student groups.  Furthermore, the number of teams (six), sponsorships (including Pepsi, Metromint, Dunkin Donuts, Burn T-Shirts, FedEx Office, King Kullen, and New York Party Time), donations (already more than $6,000 has been raised), and estimated attendance (more than 225 people) are all on the rise.

Tickets are currently on sale for the event at the USG ticket office in the Student Activities Center.  All of the proceeds from these sales will be donated directly to the Sunrise Fund.

The tournament will begin with an opening ceremony that will feature a trophy presentation to the 2008 winner, performances by the university’s Dance Team, Cheerleaders, Color Guard and Marching Band, and a message from Dr. Bob Parker, the head of the Medical Center’s Pediatric Oncology and Hematology Program. This will be followed by a singing of the National Anthem by Veronica Scorcia, the 2008 winner of the SB Idol competition and the throwing of several ceremonial first pitches

Once play commences, attendees will be treated to a day of spirited entertainment and friendly competition as ten different Greek organizations along with members from the university’s marching band compete in the tournament.   Each game will be umpired by members of the SBU Softball Team.  Also, members of the Sunrise Fund will also be on site to speak about the goals and functions of the fund as well as to answer any questions the attendees have.

Besides softball, the APD Fall Classic will feature live music from an on-site DJ and free food and drinks donated from our various sponsors, including Pepsi, Metromint, and Dunkin Donuts.  Additionally, cotton candy and snow cone machines have been donated to the event by New York Party Time to further keep the day’s guest entertained.

For additional information, visit these websites.