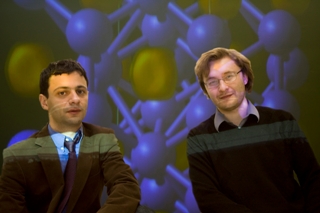 Opening the road for computational discovery of materials with desired properties

STONY BROOK, NY, September 13, 2011 – Stony Brook University researchers,  Artem R. Oganov, Professor of Geosciences and Physics and Dr. Andriy O. Lyakhov, Research Fellow, have developed an algorithm capable of predicting new superhard materials. The findings of their work have just been published in a paper entitled “Evolutionary search for superhard materials: Methodology and applications to forms of carbon and TiO2,” in the current online edition of Physical Review B.

Superhard materials, used in many scientific and technological applications (for example as abrasive coatings in cutting and drilling tools), are a relatively small class of compounds. The most famous and widely used of these are diamond and cubic boron nitride. However, both of them are unstable at high temperatures, which limit their applicability. Therefore, the search for new superhard compounds is of great interest. Despite numerous efforts, progress has been slow. “The traditional trial-and-error approach to search for new materials usually involves a lot of pain and little gain,” explained Prof. Oganov.

Dr. Lyakhov and Prof. Oganov propose to use supercomputers in the search

for new superhard materials. Scientists developed a special hybrid evolutionary algorithm, and tested it on a few promising systems, such as carbon and carbon nitride (which many scientists believe to be able to surpass the diamond by hardness). The results show the power of this algorithm and confirm that diamond is the hardest form of carbon and, so far, the hardest material. As a byproduct of the calculations, a set of novel superhard carbon structures was obtained – these are only marginally softer than diamond. It was also shown that carbon nitride cannot be harder than diamond.

Another area where the algorithm can be used is the validation of controversial experimental data. Researchers give an example by dethroning TiO2 as the hardest known oxide. The suggestion that a high-pressure form of TiO2 is the hardest oxide was made by Swedish researchers in a highly-cited paper published in 2001 in Nature. However, calculations show that all possible forms of TiO2 are much softer than common corundum, Al2O3, and therefore the experimental data from 2001 has to be reconsidered.  The latest experiments done at Yale University and the University of Tokyo point in the same direction. In the near future, scientists plan to apply their algorithm to promising systems, such as boron-carbon-oxygen compounds, to search for new superhard materials.

The value of this work goes well beyond the field of superhard materials. The optimization of hardness is a successful proof-of-principle example, which opens the way for a novel computational technique. “A new era in material design and discovery is about to begin,” said Prof. Oganov. “New materials with desired properties will be routinely discovered using supercomputers, instead of the expensive trial-and-error method that is used today.”