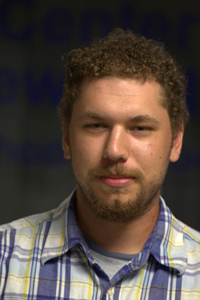 
A senior and computer science major, Somerville’s essay was written in the form of a letter to Newsday and selected as the most thoughtful, well written as well as the best critique using The Center for News Literacy’s key points.

Sommerville’s letter to the Newsday editor applauded and analyzed multiple articles concerning the trial of those accused of a hate crime in the 2008 murder of Marcelo Lucero. Somerville has a strong connection to the incident, which happened right around the corner from his house.

“This murder has given my community a bad reputation on a now-international scale,” Somerville said. “Which makes me feel even more attached, as I am seeking as much updated and accurate information as possible.”

Somerville’s interest in the story led him to become actively involved in events designed to increase community growth.  “This essay assignment, the articles and all the background information included in them, helped me be a better news consumer as well as help me come full circle by evaluating something I’ve been living through,” said Somerville.

Each semester, News Literacy students are assigned a final essay. Those essays that receive an “A” are given to an independent panel of judges who then decide which one is the best of the bunch. Somerville’s essay was chosen as the best of the 510 submitted in the spring semester.

Each semester the winner receives a full semester’s worth of in-state tuition, paid for by the New York Community Bank Foundation. “We feel it’s critical for our young people to truly be able to discern the facts, considering all the information they get from new technology,” said Marian Conway, the Foundation’s Executive Director. The New York Community Bank Foundation, which has invested $10,000 so far in the News Literacy Essay scholarships, was organized in 1997 and supports local community organizations which contribute to the quality of life.

“The great thing about these final essays is that they don’t measure how much a student memorizes, they measures how much a student eternalizes,” said Rick Hornik, a professor of News Literacy as well as Somerville’s lecturer. “Justin was able to reflect our key points while also maintaining a good distance in order to analyze the information.”

Somerville’s association with Stony Brook University began long before college. At 16, sniffles and a cold that didn’t go away within a month turned out to be Hodgkin’s Lymphoma. “We went to the doctor thinking I had a really bad cold until a chest x-ray told us it was cancer,” said Somerville. “It was a ridiculous roller coaster ride.”

Since the cancer was caught in the early stages, the treatment was easier than most other cancers and led to a positive outcome—for five years now, Somerville has been cancer free. He is very thankful to the staff at the Stony Brook Medical Center and had such an enjoyable experience there that he began working at the hospital as a patient transporter shortly after his treatment ended.

“It’s a wonderful place Stony Brook—both the medical center as well as the university,” said Somerville. “It was the only school I applied to when the time came.”

News Literacy was developed at Stony Brook University by the Dean of the School of Journalism, Howard Schneider and is a major initiative of the school. News Literacy is the largest lecture course on campus, enrolling more than 1,500 students per year. It aims to teach students how to analyze news from all mediums using critical thinking skills.

The Center for News Literacy at Stony Brook University is the first of its kind and is funded by more than $2 million in grants from the Ford, McCormick and John S. and James L. Knight Foundations. The grants pay for development of curriculum, a campaign to teach it to 10,000 undergraduates from all academic majors and export of the course to other campuses. The full course or elements of it have been adopted at 10 other campuses, with new proposals in the works at more.