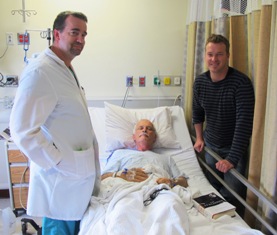 Two days after performing surgery and IRE, Dr. Kevin Watkins (left), Chief of Upper Gastrointestinal and General Oncologic Surgery at Stony Brook University Medical Center, told Jerry Gates and his son Tyler that Jerry “looks like a man who hasn’t had surgery.” Jerry is now back in San Jose- he and his wife celebrated their 40th wedding anniversary on August 28.

STONY BROOK, NY, September 3, 2010 — Life was good for 64 year-old Jerry Gates, a San Jose plant rental company owner. He had two grown children, Tyler 32 and Jessica, 29, who adored him, a wife with whom in August this year he celebrated his 40th year of marriage, and a thriving business that allowed them to live a very comfortable lifestyle in the self-proclaimed capital of Silicon Valley. A non-smoker, non-drinker, Jerry could not recall experiencing any health trouble except for an occasional awareness of tinnitus in his ear. He was 5′ 11″ and 225 lbs.

That bubble quickly burst on March 15, when, following a month-long bout with H-pylori, a bacteriological infection, an inability to keep his food down, and a drastic weight loss that brought him to 168 pounds, Jerry underwent a PET scan followed by a biopsy. The surgeon reviewing the case explained the full extent of the biopsy results – inoperable stage IV pancreatic cancer. He then told Jerry to “get his affairs in order because he did not have long to live.”

“That was the worst day of my life,” said Tyler.

The Gates family refused to accept the prognosis without a fight. Tyler and his sister jumped on the internet and started researching some of the latest technology and treatments for Pancreatic Cancer; they took a trip with their father to UCSF to see a top oncologist who suggested an aggressive course of chemotherapy. Then they contacted Dr. Kevin Watkins at Stony Brook University Medical Center, Chief of Upper Gastrointestinal and General Oncologic Surgery.

Dr. Watkins’ name is prominently associated with the latest treatments for pancreatic cancer. He is the first surgeon in the world to use NanoKnife® technology to treat cancer of the pancreas, and Mr. Gates joined a mounting number of patients from around the country and around the world who are seeking hope and  help from Dr. Watkins. Using irreversible electroportation (IRE), the NanoKnife® disrupts the cell membrane and kills cancer cells by using controlled electrical pulses to open microscopic pores in the cells of the targeted area. The body then rids itself of the dead cells permanently, without damaging the surrounding support structure which allows a lattice for new cell in growth.

“It’s a remarkable technique because it opens doors for us to offer treatment to patients who previously had no options,” said Dr. Watkins. “There is nothing like it – to see the relief in the face of a patient and their family when we tell them, ‘we might be able to help you’,” said Dr. Watkins.

He cautions, however, that this breakthrough technology is not indicated for all cases.

“It is not a viable option if the cancer has metastasized, or spread elsewhere in the body.”

For those who are NanoKnife candidates, the procedure can result in a major improvement in quality of life and extended time beyond the anticipated few months associated with the advanced level of disease.

After months of preliminary chemo treatments, cross country correspondence with Dr. Watkins’ assistant, Jennifer Novotny, and Nurse Coordinator, Patti Zirpoli, medical records, pathology reports and image transfers and negotiations around cost (Gates’ insurance policy did not cover a procedure in a hospital in New York), and a five day advance visit to Stony Brook to learn first hand about the procedure, Jerry Gates learned he was a candidate. He came back to Stony Brook to have the procedure done on July 21st. When Dr. Watkins walked into his room the following Friday afternoon, he was amazed.

“This looks like a man who hasn’t had surgery,” he said.

Dr. Watkins did use the NanoKnife on Jerry Gates to address the tumor cells. He also removed forty percent of his pancreas, one adrenal gland and the pseudo-cyst that was pushing into his digestive system.

Although Dr. Watkins was the first to use IRE for pancreatic cancer, it has been used in the treatment of liver, colon, renal, urologic, and lung cancers. “It is ideal for getting tumors in hard-to-reach locations or for tumors close to vital structures such as large blood vessels that could be damaged by conventional surgery,” says Dr. Watkins.

“Everyone back home said ‘we can’t operate’ and this was our only shot,” said Tyler.

About Pancreatic Cancer
According to the National Cancer Institute, each year in the United States, more than 43,000 people are diagnosed with cancer of the pancreas. Most are over 65 years old. It is estimated that there will be 43,140 new cases and 36,800 deaths from pancreatic cancer in the United States in 2010. For more information about Pancreatic Cancer go to http://www.cancer.gov/cancertopics/types/pancreatic.