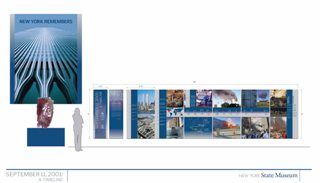 STONY BROOK, NY, August 26, 2011 – Stony Brook University has been selected as one of 30 statewide locations to host the “New York Remembers” exhibition commemorating the tenth anniversary of the attacks on the World Trade Center.

The exhibit, which contains important historical September 11th artifacts, will be on display throughout September in the Skylight Lobby of the Charles B. Wang Center weekdays between 8 am-8 pm and from 2 pm-8 pm on weekends. The exhibition is free and open to the public.

Governor Andrew M. Cuomo, the New York State Museum and the National September 11 Memorial & Museum have collaborated on this statewide exhibition to provide locations throughout the State of New York to reflect and remember the victims of September 11th and honor the heroes that have sacrificed so much in the rescue, clean-up and recovery.

The Stony Brook University exhibition will feature five artifacts* including:
· A panel from a Ladder 3 fire truck, one of the first units to respond to the WTC site – 12 members of Ladder 3 perished while evacuating civilians from the North Tower;
· A large American Flag;
· A victims board containing letters and notes from loved ones and for those considered missing;
· A triptych, which is a three-part panel used as a blockade in train stations to prevent commuters from accessing the rubble during the aftermath; and,
· A 35-foot long chronological timeline of events from Ground Zero to the new museum.

“Stony Brook University is proud and honored to be selected by Governor Andrew M. Cuomo, the New York State Museum, and the National September 11 Memorial & Museum as a host location for the ‘New York Remembers’ exhibition,” said Samuel L. Stanley, MD, President of Stony Brook University. “As home to the Long Island World Trade Center Medical Monitoring Program, under the direction of Dr. Benjamin Luft, we anticipate that the Stony Brook University location will hold a high level of interest with the many thousands of first responders who are being cared for under that program, their family members and all Long Islanders who want to view this moving memorial exhibit.”