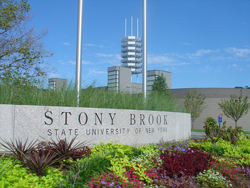 The University is ranked tied for 96th in the U.S. News rating of “best national universities,” which the magazine defines as universities that “offer a wide range of undergraduate majors as well as master’s and doctoral degrees, many strongly emphasize research.” Stony Brook is tied for 43 rd in the category of top public national universities.

Stony Brook’s Engineering program was also selected as one of the nation’s best, ranking in a tie for 64th for universities whose highest degree offered is a doctorate.

Part of the State University of New York system, Stony Brook University encompasses 198 buildings on 1,454 acres. In the 51 years since its founding, the University has grown tremendously, now with nearly 24,000 students and 2,100 faculty, and is recognized as one of the nation’s important centers of learning and scholarship. It is a member of the prestigious Association of American Universities. Considered one of the “flagship” campuses in the SUNY system, Stony Brook University is a driving force of the Long Island economy, with an annual economic impact of $4.65 billion, generating nearly 60,000 jobs. Stony Brook accounts for nearly 4% of all economic activity in Nassau and Suffolk counties, and roughly 7.5 percent of total jobs in Suffolk County. –