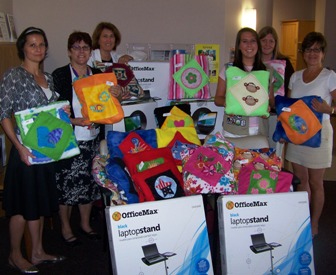 While other kids her age were lounging at the beach and by the pool, 18 year-old Girl Scout Gold Award candidate, Kimberly McCoy of Centereach decided to spend a good part of her summer stitching handmade fleece “quillos” (a cuddly combination between a quilt and a pillow) to donate to pediatric patients at Stony Brook University Hospital.

A 2009 graduate of Our Lady of Mercy Academy in Syosset, Kimberly’s Girl Scout Gold Award project was inspired by her grandmother a victim of cancer. Using a pattern for the hand designed quillos that she saved from a public library class which she took in fifth grade, Kim was able to stitch 67 fleece quillos, graphically themed for different pediatric patient age groups.

“These handmade fleece quillos are basically fleece blankets that can also be folded up into pillows,” said Kim. “They are also something that children love and can take in and out of the hospital with them.”

Kim raised approximately $3,200 during a church fundraiser which she used to pay for fleece and other materials to make the quillos. She had a surplus of money afterward, and contacted Child Life Services at Stony Brook to determine what the best use of the funds would be, and used it to buy four laptops and four laptop stands. Left over quillo materials were to the Quilters Club at Stony Brook University Hospital, which is made up of University employees who makes quilts for patients.

While working as a Water Safety Instructor during the week and preparing for her freshman year at James Madison University, Kimberly was able to serve well over 80 hours of community service toward her Gold Star working on this project. Her mother, Barbara McCoy, and Aunt Diane Santangelo, a Nurse Manager & Nurse Practitioner in Acute Pain Service Stony Brook University Hospital, helped her make a connection with the hospital and evaluate the best way to contribute her time and talent.

“The kids absolutely love these quillos, and the laptops are priceless for children who are in the hospital receiving treatment over time,” said Paulette Walter, a Child Life Specialist at Stony Brook, and Kim’s contact on the Pediatric Unit. “We are so grateful for all Kim has done.”

STONY BROOK, NY, October 19, 2021– The role of neuron and dopamine loss in Parkinson’s Disease (PD) has long been recognized by neuroscientists. However, how dopaminergic modulation affects brain regions involved in the...