‘A Summer Night at Sandcastle,’ the $52 Million Bridgehampton Estate Draws More Than 400; Appearance by ‘The Mayor’ 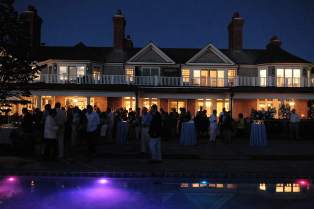 ‘A Summer Night at Sandcastle,’ the $52 Million Bridgehampton Estate Draws More Than 400; Appearance by ‘The Mayor’

STONY BROOK, N.Y., August 17, 2010 – Rudy and Judith Giuliani were special guests and co-hosts with Joe and Kristen Farrell at “A Summer Night at Sandcastle,”

a soiree attended by more than 400 benefiting the new Stony Brook Long Island Children’s Hospital at Stony Brook University. Sandcastle, the $52 million Bridgehampton estate of real estate developer Joe Farrell and his wife Kristen, has the distinction of netting the highest two-week rental in the Hamptons, listing for $500,000 for two weeks. The Farrells donated the use of their estate as the fund-raiser venue as a token of support for the new Children’s Hospital and as an expression of gratitude to the NICU at Stony Brook where their child was cared for five years ago following complications at birth.

Also seen at A Summer Night at Sandcastle were Fox 5’s Bill Hemmer, co-host of “America’s Newsroom,” who conducted the live auction;

Launched on June 30, 2010, Stony Brook Long Island Children’s Hospital represents a forceful response by the medical center to an increasing national trend within pediatric medicine in the severity of childhood illness, prevalence of chronic conditions and survivorship of care.  As the only children’s hospital east of the Queens border and the only University-based children’s hospital on Long Island, Stony Brook Children’s provides patients with state-of-the-art technology and world-class specialty physicians, nurses and researchers. It serves the needs of the children of Suffolk County as a community hospital for local residents, a tertiary hospital for complex, chronic or congenital conditions,

and a safety net hospital for those who are underinsured or uninsured.

An associate membership status in the prestigious National Association of Children’s Hospitals and Related Institutions (NACHRI), which promotes the health and well-being of all children and their families through support of children’s hospitals and health systems that are committed to excellence in providing health care to children, Stony Brook Children’s currently operates 100 pediatric beds with a faculty of more than 100 pediatric providers in 30 different specialties and more than 200 voluntary pediatric faculty members. More than 7,000 children and adolescents are admitted to Stony Brook each year and in 2009 the Stony Brook provided primary pediatric care services to more than 50,000 children with Medicaid coverage.

In 2011, Stony Brook will complete the construction of the most advanced Neonatal Intensive Care Unit (NICU) in New York State, adding to its existing specialized children’s services, including the Regional Perinatal Center, the National Pediatric Multiple Sclerosis Center, the Pediatric Hematology/Oncology Program, the Pediatric Cardiology Program, Pediatric HIV and AIDS Center, Cystic Fibrosis Center and the Cody Center for Autism and Development Disabilities.