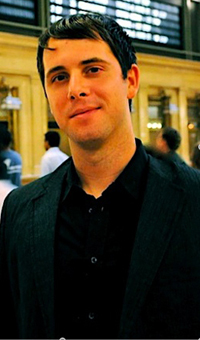 Holloway was named a Graduate Fellow by the Fulbright Commission and will receive a research grant to study at the Albert-Ludwigs-Universität Freiburg. He is one of over 1,500 U.S. citizens who will travel abroad through the Fulbright U.S. Student Program during the 2010-2011 academic year.

“Travis is a thoughtful and inventive student who thinks globally about international trends in philosophy,” says Robert P. Crease, Chairman of the Department of Philosophy.  “He spends as much time as he can in Europe, brushing up on languages and studying with preeminent philosophers there.  This is a wonderful opportunity for him, and he is the perfect person for it.”

Holloway entered the Ph.D. program in Philosophy at Stony Brook in Fall 2007.  He holds a B.A. from Belmont University and an M.A. from Boston College, where he received the Graduate School of Arts and Sciences School Award in 2007.  He has studied at the University of Paris-IV (La Sorbonne), the Albert-Ludwigs-Universität Freiburg in Germany, and Lingnan University in Hong Kong.

The Fulbright Program is the flagship international educational exchange program sponsored by the U.S. government and is designed to increase mutual understanding between the people of the United States and the people of other countries. The primary source of funding for the Fulbright Program is an annual appropriation made by the U.S. Congress to the U.S. Department of State, Bureau of Educational and Cultural Affairs. Participating governments and host institutions, corporations and foundations in foreign countries and in the United States also provide direct and indirect support. Recipients of Fulbright grants are selected on the basis of academic or professional achievement, as well as demonstrated leadership potential in their fields. The Program operates in over 155 countries worldwide.

Since its establishment in 1946 under legislation introduced by the late U.S. Senator J. William Fulbright of Arkansas, the Fulbright Program has given approximately 300,000 students, scholars, teachers, artists, and scientists the opportunity to study, teach and conduct research, exchange ideas and contribute to finding solutions to shared international concerns.

Fulbright recipients are among over 40,000 individuals participating in U.S. Department of State exchange programs each year. For more than sixty years, the Bureau of Educational and Cultural Affairs has funded and supported programs that seek to promote mutual understanding and respect between the people of the United States and the people of other countries. The Fulbright U.S. Student Program is administered by the Institute of International Education.

Travis Holloway is the son of Gary and Marsha Holloway of Mount Vernon, Illinois, and a graduate of Mount Vernon Township High School.  He currently lives in New York City.