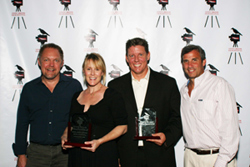 
STONY BROOK, N.Y., August 5, 2009
–
The Stony Brook Film Festival closed with the New York premiere of The Little Traitor, with writer and director Lynn Roth hosting a Q&A after the film, followed by an Awards Reception on the Staller Center Main Stage. John Anderson, film critic, who was master of ceremonies for the evening, announced Stony Brook’s Audience and Jury awards for best features and shorts.


Alan Inkles, founder and director of the Festival, heard from both filmmakers and audience alike, who praised the diversity of the Stony Brook Film Festival. “It has been an amazing year for us both artistically and in terms of attendance. We had the largest crowds in our 14 year history and the audience voting gave some of the highest scores we have ever seen,” said Mr. Inkles.

Directed by Dror Zahavi. Written by Ido Dror and Yonaton Dror. Produced by Avi Spielmann, Shlomo Mograbi and Heike Wiehle-Timm. With Hili Yalon, Shredi Gabrin and Shlomo Vishinsky. A riveting film from Israel about a young Jewish girl cut off from her Orthodox roots, a shopkeeper who has lost his soldier son, and a young Palestinian man on a desperate mission. An Israeli-German co-production by Israfilm (Tel Aviv) and Relevant Film (Hamburg).

Parents of an adopted boy fight to keep their son when Joey’s biological father lays claim to him. Based on the novel by best-selling author Karen Kingsbury.

A son attempts to reconnect with his father. He copes with his father’s dementia and the secrets and resentments that threaten the family’s future. From Barn Door Pictures in association with Highbrow Entertainment.

Produced by Rebecca L. Brown. On the eve of Ayatollah Khomeini’s return to Iran, a double agent agrees to exchange crucial information with the CIA in return for safe passage out of the country. Inspired by true events.

Written and directed by Peter Besson.

Produced by Stephen Sweeney. After meeting the love of his life, a young man has to convince her she’s the one. Not an easy feat, considering how they met.

Lynn Roth, writer and director of The Little Traitor, was presented with a Closing Night award. The Little Traitor is based on the novel Panther in the Basement by Amos Oz, one of Israel’s most renowned authors. Alfred Molina stars in the role of Sargeant Dunlop, a British soldier who befriends an eleven-year-old Jewish boy in 1947 Palestine, just a few months before Israel becomes a state.

The Stony Brook Film Festival, presented by Staller Center for the Arts, is known for its large audiences and high selectivity, and as a filmmakers’ favorite on the fest circuit. Stony Brook screens new, independent films with 35mm and Beta formats preferred. Festival’s entry deadline is May 1 each year.

About Staller Center for the Arts

Staller Center for the Arts, Stony Brook University’s cultural showplace, is located in the center of campus. Staller Center has been the home of the Stony Brook Film Festival  every summer since its beginnings, which started with classics and art films. Staller Center offers dozens of performances in dance, music, art, theatre, and film from around the world and is a cultural resource to the campus and community. The Main Stage Theatre has more than 1,000 seats, with the more intimate Recital Hall seating 400. The Metropolitan Opera (Met Opera Live in HD) comes to Staller Center on screen in the Main Stage Theatre, broadcast live from the Met during the opera season. Educational programs offered in connection with selected opera broadcasts are supported in part by Verizon. The spacious University Art Gallery exhibits work by outstanding professional artists, faculty and students and is open to the public. The University Art Gallery is generously supported by the Paul W. Zuccaire Foundation.

For additional information contact: Julie Rulon Greene at (631) 632-7233 or
julie@stonybrookfilmfestival.com
–