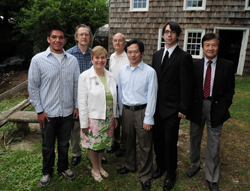 STONY BROOK, N.Y., August 3, 2010 – The historic Stony Brook Grist Mill has been given a new life by Stony Brook University faculty and students, in concert with the Ward Melville Heritage Organization (WMHO), owners and operators of Mill, c. 1751, as part of a demonstration project on the untapped potential of New York State’s renewable energy sources.  The mill, constructed in 1751 and placed on the National Register of Historic Places in 1990, is now producing electricity using the same hydropower once used to mill grain thanks to the efforts of Assistant Professor Lei Zuo, and undergraduate students Dimauro Edwards, Brian Bates, Edwin Gonzalez, all from the graduating class of 2010 in the Department of Mechanical Engineering, with the assistance of machinist Lester Orlick.


Working with the WMHO, which operates the historic site, the Grist Mill Hydropower system was installed in April. Prof. Zuo said he believes this is the first instance of an old water-powered mill in New York State being retrofitted to produce electricity.

“The Grist Mill Hydropower System was developed to show the viability of retrofitting water mill sites with electromagnetic generators for the production of hydroelectricity,” said Prof. Zuo. “The motivation behind the project is to increase the awareness of sustainability and development of renewable hydropower sources within New York State, 43% of which remain undeveloped.”

“Some 2 years ago WMHO and Professor Jeffrey Ge, deputy chair of SBU’s Mechanical Engineering Department, discussed the development of an extracurricular educational program for high school students,” said Gloria Rocchio, President of WMHO. “Subsequently, we were approached by Professor Zuo to create this wonderful hydropower demo project. In the 1700s the Stony Brook Grist Mill was the only mechanized facility in the area.  Because of its ability to harness energy, in addition to grinding grain into flour, the mill was also a sawmill, a winery and a cabinet shop over the years. Having this unique project brings it back full circle and illustrates a practical application for the effectiveness of waterpower.”

The Grist Mill Hydropower is now producing up to 1.5 kilowatts of electricity using a generator with 80% efficiency installed in the mill’s lower level room, roughly the amount needed to supply electricity to two homes in New York State, according to Prof. Zuo.

Although much of the national conversation about alternative energy sources has focused on wind and solar energy, “I believe the small hydropower is also worth of attention in the U.S.,” said Prof. Zuo, citing a recent report of the Word Bank Energy Unit that found small hydroelectricity of 1-100 kW has a much lower cost than similar sized wind turbines or solar PV. “The potential benefits of such a small scale hydropower systems include comparatively low costs of construction, installation, and generation when referenced to other energy sources, the production of emission-free renewable energy which can be integrated into the existing power grid, and longevity in performance with high conversion efficiency.”

Adam Smith built the first grist mill on the site in 1699 using hydropower from a nearby pond to turn its water wheel, which operated the gears that turned the millstones. When that structure was washed away by a flood, the current mill was built in 1751. In addition to grinding grains into flour, the mill was also used over the years to saw lumber. In 1947, Ward Melville purchased the Grist Mill from its last operator and gave it to what is now the Ward Melville Heritage Organization.


Adam Smith built the first grist mill on the site in 1699 using hydropower from a nearby pond to turn its water wheel, which operated the gears that turned the millstones. When that structure was washed away by a flood, the current mill was built in 1751. In addition to grinding grains into flour, the mill was also used over the years to saw lumber. In 1947, Ward Melville purchased the Grist Mill from its last operator and gave it to what is now the Ward Melville Heritage Organization.

“Since the Stony Brook Grist Mill no longer processes harvested crops but instead serves as a museum, the hydroelectricity system will educate its visitors on the capabilities of producing hydropower and allow them the chance of seeing it in action,” said Prof. Zuo.

The project’s intellectual merit, he said, is that it expands the knowledge base of the most effective method of converting hydropower to electricity from developed machinery, which is useful for future applications. New York State alone once had more than 10,000 such water mills, most of which were abandoned after industrial revolution, “but the energy sources generated by water flow remain there and can be harnessed.” Small hydropower using running water has economic and energy benefits and less environmental impact than other energy sources, he said.

About the Stony Brook Grist Mill

The Stony Brook Grist Mill is listed on the New York State and National Register of Historic Places and is designated as a New York State Revolutionary War Heritage Trail site.  Located on Harbor Road off Main Street in Stony Brook, it is open Saturday and Sunday, Noon to 4:30 pm.  Cost is $2 for adults and $1 for children 12 and under.  For further information visit wmho.org.

About the Stony Brook University

Part of the State University of New York system, Stony Brook University encompasses 200 buildings on 1,450 acres. In the 50+ years since its founding, the University has grown tremendously, now with nearly 24,700 students and 2,200 faculty and is recognized as one of the nation’s important centers of learning and scholarship. It is a member of the prestigious Association of American Universities, and ranks among the top 100 national universities in America and among the top 50 public national universities in the country according to the 2010 U.S. News & World Report survey. Considered one of the “flagship” campuses in the SUNY system, Stony Brook University co-manages Brookhaven National Laboratory , joining an elite group of universities, including Berkeley, University of Chicago, Cornell, MIT, and Princeton, that run federal research and development laboratories. SBU is a driving force of the Long Island economy, with an annual economic impact of $4.65 billion, generating nearly 60,000 jobs, and accounts for nearly 4% of all economic activity in Nassau and Suffolk counties, and roughly 7.5 percent of total jobs in Suffolk County. – See more at: http://commcgi.cc.sunysb.edu/cgi-bin/am2/admin.cgi#sthash.qxyuyCjV.dpuf