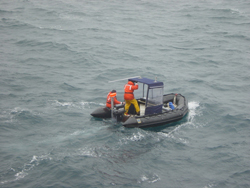 Using a small boat, researchers were able to measure the amount of krill in shallow, close to shore areas near fur seal and penguin colonies on Livingston Island. These waters were previously inaccessible to researchers. Photo credit: Derek Needham.

STONY BROOK, N.Y., August 4, 2010 – Using smaller vessels that allow access to shallow, nearshore waters, researchers from Stony Brook University and the Southwest Fisheries Science Center conducted the first multi-year survey of the population of Antarctic krill (Euphausia superba) in coastal waters near Livingston Island and discovered that nearshore waters had significantly higher krill biomass density than offshore waters. They also found that the nearshore waters had less interannual variation than offshore waters. These findings were published in the July 2010 issue of the Canadian Journal of Fisheries and Aquatic Sciences.


Because large research vessels cannot safely travel in shallow nearshore waters, previous population surveys of Antarctic krill were restricted to offshore sampling. With funding provided by the National Science Foundation Office of Polar Programs and the United States Antarctic Marine Living Resources program, Dr. Joseph Warren, assistant professor in the School of Marine and Atmospheric Sciences at Stony Brook University, and Dr. David Demer, leader of the Advanced Survey Technologies Program at the Southwest Fisheries Science Center, conducted six acoustic surveys from small boats in the nearshore waters north of Livingston Island, Antarctica. From 2000 through 2007, they examined the abundance and distribution of Antarctic krill in coastal waters within several miles of shore. Deploying their scientific equipment from a 6 m inflatable boat, Warren and Demer were able to carry out their measurements in water ranging from 500 to 2 m in depth. They compared their observations in the nearshore waters with those from offshore surveys of the western Scotia Sea conducted during the same year.