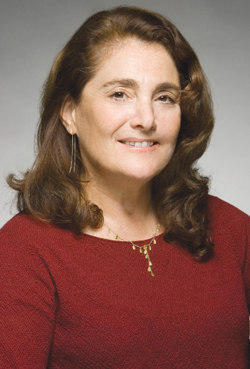 Lorna W. Role, Ph.D. to receive up to $2.5 million over five years for research that could help individuals with Alzheimer’s and other degenerative brain diseases

STONY BROOK, N.Y., July 22, 2010 – Lorna W. Role, Ph.D., Chair of the Stony Brook University
Department of Neurobiology and Behavior
, and member of Central Nervous System Disorders center in the
Centers for Molecular Medicine
at Stony Brook, has been named a winner of the prestigious Director’s Pioneer Award from the
National Institutes of Health
(NIH) for her proposal for light induced deep brain stimulation of cholinergic neurons that are involved in degenerative brain diseases such as Alzheimer’s.


The Director’s Pioneer Award is designed to support a small number of investigators of exceptional creativity who propose bold and highly innovative new research approaches that have the potential to produce a major impact on broad, important problems in biomedical and behavioral research, according to the NIH. Dr. Role will receive up to $500,000 a year for five years to fund her research. Stony Brook will receive up to half that amount again as part of the award, which recognizes creative thinking and daring in scientific research.

“NIH is pleased to be supporting scientists from across the country who are taking considered risks in a wide range of areas in order to accelerate research. We look forward to the results of their work,” said NIH Director Dr. Francis S. Collins, M.D., Ph.D.

“I didn’t believe the person who called [from the NIH],” Dr. Role said of the call she received Monday. “I just kept saying, ‘You’re kidding. You’re kidding.”

“Dr. Role’s work is marked by creative approaches to one of the most important questions in neuroscience today — how do we preserve the nerve cells responsible for keeping our brains working at full capacity?” said Samuel L. Stanley, Jr., M.D., President of Stony Brook University. “The Pioneer Award represents recognition by her peers for her outstanding contributions to this field, but more importantly, the extraordinary potential of her research. Stony Brook is very proud of Dr. Role and her colleagues.”

Her research goal is to find ways to activate neurons that are among those lost in diseases involving cognitive decline, such as with Alzheimer’s. In explaining it to her 92-year-old mother, who definitely does not suffer from the disease, she put it in simpler terms. “She asked me what I got the award for, so I said ‘Well mom, I’m going to try to cure Alzheimer’s disease’. And she said, ‘Oh good! Can you hurry up?'”

According to Dr. Role, the neurotransmitter acetylcholine is an important, though inadequately understood, modulator of brain circuits related to attention and memory. Cognitive decline in Alzheimer’s disease is due to decreased ACh “tone” from failing cholinergic neurons in the basal forebrain. New advances in selective light-induced stimulation of brain nuclei using fiber optics with concurrent monitoring of brain circuits and behavior will be utilized in her research to develop therapeutic approaches to reversing cholinergic-based memory loss.

“The critical thing is being able to selectively activate this particular class of neurons. There are very few of them in the brain and there hasn’t been a way to get at them. This combines optical stimulation and genetic technology to introduce an optical probe into a particular set of cells, allowing us to then use light to selectively activate those neurons.” Dr. Role said the particular nucleus she is concentrating on is known as the Nucleus Basalis of Meynert, which is renowned for degenerating in individuals with Alzheimer’s.

“I am thrilled that Lorna has received this highly significant recognition,” said Eric Kaler, Provost and Senior Vice President for Academic Affairs, and Vice President for Brookhaven Affairs at Stony Brook University. “In addition to being a world-class scholar, she has been a tremendous leader of her Department and a key part of the renewal of neuroscience research on campus.”

For both programs, the NIH selects recipients through special application and evaluation processes. Distinguished outside experts identify the most highly competitive applicants.

Dr. Role had to appear before a panel of distinguished scientists from various fields at the NIH in Bethesda, Md., to argue why her proposal should receive funding. Only a few of the panel members were neuroscientists, she said. “Most of panel members have to be wooed into listening and believing that what you’re going to do is different. It was the scariest thing I ever did.” Faculty members in her department helped her with the proposal and helped prepare her for her defense before the NIH panel, she said.

To be considered “pioneering” by the NIH, the proposed research must reflect ideas substantially different from those already being pursued in the investigator’s laboratory or elsewhere. Biomedical and behavioral research is defined broadly in this announcement as encompassing scientific investigations in the biological, behavioral, clinical, social, physical, chemical, computational, engineering, and mathematical sciences. Awardees are required to commit the major portion (at least 51%) of their research effort to activities supported by the Pioneer Award.

“Funding agencies usually want some guarantee of success. Here, they feel the guarantee is that the person is going to persist when it doesn’t work —  and inevitably in Biology things don’t go as expected — so you have to rethink and re-adjust; this is a huge part of doing science,” Dr. Role explained. “In regular grant proposals you must detail each of the steps you will take and do so with well defined, tried and tested approaches. The NIH Pioneer Award allows one to take a much broader and more flexible approach to complex scientific problems. You ask the experimental questions and you have to listen to how the biology answers.  Then you revise your approach and get back on it!”

“Lorna truly epitomizes the spirit of the Pioneer Award, applying exceptional creativity to transform important challenges in biomedical and behavioral research,” said Kenneth Kaushansky, M.D., Dean, Stony Brook University School of Medicine and Sr. Vice President of Health Sciences. “It has been an honor to learn of her research, work with her on furthering the neurosciences in the School of Medicine and Stony Brook Health Sciences Center, and to share in her excitement over the potential of this award to transform our understanding of neurodegenerative diseases, some of the most disabling maladies of our time. I look forward to great progress to come from Lorna and her Pioneer Award.”

Dr. Role, who came to Stony Brook two years ago after 25 years at Columbia University, said her work began immediately after learning she had received the award. She credits Stony Brook with giving her the support that allowed her to apply for the award. “SBU has supported the Neurobiology department in establishing new experimental facilities and in bringing in young faculty that have synergized with the senior members of the department to create a great environment.”

“It’s a real opportunity and a real challenge. I wouldn’t have been able to do it if I hadn’t moved here and gotten such great support,” said Dr. Role, referring to the ability to recruit new faculty and set up new high tech core facilities. “If I didn’t have the facilities and faculty – in particular the Center for Nervous Systems Disorders under Director Simon Halegoua in the Centers for Molecular Medicine at Stony Brook, where my labs are located – I wouldn’t have been even able to develop the concepts that are related to this project. I’m learning a lot from my new hires and from the Neurobiology faculty. I feel really lucky that I’m here.”

The Department of Neurobiology and Behavior was formed in 1979 as one of the first Neuroscience departments in the country to bridge undergraduate and medical school research and educational missions. The configuration of the department, as part of SUNY Stony Brooks School of Medicine and the College of Arts and Sciences was carefully crafted to optimize the educational and research opportunities of trainees, balancing the demands of teaching and that of securing research funding to conduct the highest quality research.  The founding Chair was Dr. David H. Cohen and within a few years the department grew to ~ 15 faculty members- primarily Systems neurobiologists – all of whom were successful in establishing NIH-funded research groups.

“I can’t begin to express how delighted I am that Lorna has received this prestigious award,” said Nancy Squires, Ph.D., Dean of the College of Arts and Sciences at Stony Brook University. “In her two brief years here as chair of the Department of Neurobiology and Behavior, Lorna has already revitalized the area of functional-systems neuroscience at Stony Brook. Her own research epitomizes this approach, applying basic neuroscience methods in the search for treatments for terrible neurological conditions such as Alzheimer’s disease that devastate individuals and families. The Pioneer Award will give Lorna the freedom to vigorously pursue her ambitious research goals.”

In 1988 Dr. Cohen was succeeded as chair by Dr. Lorne M. Mendell who was given authority to recruit seven new faculty members to maintain the university’s commitment to Neuroscience. An additional four faculty were hired during his tenure to bring the total faculty to 20. A major focus of this growth phase was in molecular and cellular neurobiology. Again, the new faculty members thrived and the contributions of the Stony Brook NBB to the international community of neuroscience grew more profound. After a brilliantly successful 18 years at the helm, Dr. Mendell stepped down in 2006 and Dr. S. Halegoua served as Interim Chair. There was a nation-wide search, and Dr Lorna Role was recruited from Columbia University P & S and appointed chair of the Department in April 2008. This began the third wave of growth, redirection and revitalization of the department’s research mission.

Part of the State University of New York system, Stony Brook University encompasses 200 buildings on 1,450 acres. In the 50+ years since its founding, the University has grown tremendously, now with nearly 24,700 students and 2,200 faculty and is recognized as one of the nation’s important centers of learning and scholarship. It is a member of the prestigious Association of American Universities, and ranks among the top 100 national universities in America and among the top 50 public national universities in the country according to the 2010 U.S. News & World Report survey. Considered one of the “flagship” campuses in the SUNY system, Stony Brook University co-manages Brookhaven National Laboratory, joining an elite group of universities, including Berkeley, University of Chicago, Cornell, MIT, and Princeton, that run federal research and development laboratories. SBU is a driving force of the Long Island economy, with an annual economic impact of $4.65 billion, generating nearly 60,000 jobs, and accounts for nearly 4% of all economic activity in Nassau and Suffolk counties, and roughly 7.5 percent of total jobs in Suffolk County.