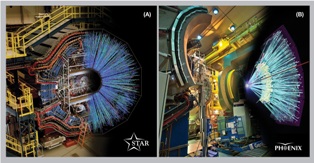 RHIC’s two large experiments, STAR and PHENIX, have multiple detector components and complex electronics for tracking and identifying the particles that fly out after ions collide at nearly the speed of light. Photo Courtesy of Brookhaven National Laboratory

UPTON, NY, July 19, 2012 — A review article appearing in the July 20, 2012, issue of the journal Science describes groundbreaking discoveries that have emerged from the Relativistic Heavy Ion Collider (RHIC) at the U.S. Department of Energy’s Brookhaven National Laboratory, synergies with the heavy-ion program at the Large Hadron Collider (LHC) in Europe, and the compelling questions that will drive this research forward on both sides of the Atlantic. With details that help enlighten our understanding of the hot nuclear matter that permeated the early universe, the article is a prelude to the latest findings scientists from both facilities will present at the next gathering of physicists dedicated to this research — Quark Matter 2012, August 12-18 in Washington, D.C.

“Nuclear matter in today’s universe hides inside atomic nuclei and neutron stars,” begin the authors, Barbara Jacak, a physics professor at Stony Brook University and spokesperson for the PHENIX experiment at RHIC, and Berndt Mueller, a theoretical physicist at Duke University. Collisions between heavy ions at machines like RHIC, running since 2000, and more recently, the LHC, make this hidden realm accessible by recreating the extreme conditions of the early universe on a microscopic scale. The temperatures achieved in these collisions — more than 4 trillion degrees Celsius, the hottest ever created in a laboratory — briefly liberate the subatomic quarks and gluons that make up protons and neutrons of ordinary atomic nuclei so scientists can study their properties and interactions.

“Quarks and the gluons that hold them together are the building blocks of all the visible matter that exists in the universe today — from stars, to planets, to people,” Jacak said. “Understanding the evolution of our universe thus requires knowledge of the structure and dynamics of these particles in their purest form, a primordial ‘soup’ known as quark-gluon plasma (QGP).”

RHIC was the first machine to demonstrate the formation of quark-gluon plasma, and determine its unexpected properties. Instead of an ideal gas of weakly interacting quarks and gluons, the QGP discovered at RHIC behaves like a nearly frictionless liquid. This matter’s extremely low viscosity (near the lowest theoretically possible), its ability to stop energetic particle jets in their tracks, and its very rapid attainment of such a high equilibrium temperature all suggest that the fluid’s constituents are quite strongly interacting, or coupled.

“Understanding strongly coupled or strongly correlated systems is at the intellectual forefront of multiple subfields of physics,” the authors write. The findings at RHIC have unanticipated connections to several of these, including conventional plasmas, superconductors, and even some atoms at the opposite extreme of the temperature scale — a minute fraction of a degree above absolute zero — which also behave as a nearly perfect fluid with vanishingly low viscosity when confined within an atomic trap.

Another stunning surprise was that mathematical approaches using methods of string theory and theoretical black holes occupying extra dimensions could be used to describe some of these seemingly unrelated strongly coupled systems, including RHIC’s nearly perfect liquid. “Physicists were astounded,” the authors note. Although the mathematics is clear and well established, the physical reasons for the relationship are still a deep mystery.

When the LHC began its first heavy ion experiments in 2010  — at nearly 14 times higher energy than RHIC’s — they largely confirmed RHIC’s pioneering findings with evidence of a strongly coupled, low-viscosity liquid, albeit at a temperature about 30 percent higher than at RHIC. With a higher energy range, LHC offers a higher rate of rare particles, such as heavy (charm and bottom) quarks, and high- energy jets that can probe particular properties of the QGP system. RHIC can go to lower energies and collide a wide range of ions from protons, to copper, to gold, to uranium — and produce asymmetric collisions between two different kinds of ions. This flexibility at RHIC allows scientists to produce QGP under a wide variety of initial conditions, and thereby to distinguish intrinsic QGP properties from the influence of the initial conditions.

“The two facilities are truly complementary,” said Mueller, whose work on quantum chromodynamics (QCD), the theory that describes the interactions of quarks and gluons, helps guide experiments and interpret results at both facilities. “Both RHIC and the LHC are essential to advancing our understanding of the subatomic interactions that governed the early universe, and how those gave form to today’s matter as they coalesced into more ordinary forms.”

An essential part of the experimental and theoretical research path going forward will be a detailed exploration of the nuclear “phase diagram” — how quark matter evolves over a range of energies, temperatures, and densities. LHC will search the highest range of energies, where the matter produced contains quarks and antiquarks in almost complete balance. But all evidence to date from both colliders suggests that RHIC is in the energy “sweet spot” for exploring the transition from ordinary matter to QGP — analogous to the way an ordinary substance like water changes phases from ice to liquid water to gas.

“It’s extremely gratifying that our experimental program has succeeded so beautifully so far. The connections with other areas of physics are intriguing, and the results are turning out to be even more interesting than we expected,” Jacak said.

To hear about the latest findings and paths forward for this emerging field of physics, stay tuned for Quark Matter 2012. Reporters interested in attending Quark Matter can register by contacting Karen McNulty Walsh, kmcnulty@bnl.gov, 631 344-8350, or by going to this web link.

Research at RHIC is funded primarily by the DOE Office of Science, and also by these agencies and organizations.

About Brookhaven National Laboratory
One of ten national laboratories overseen and primarily funded by the Office of Science of the U.S. Department of Energy (DOE), Brookhaven National Laboratory conducts research in the physical, biomedical, and environmental sciences, as well as in energy technologies and national security. Brookhaven Lab also builds and operates major scientific facilities available to university, industry, and government researchers. Brookhaven is operated and managed for DOE’s Office of Science by Brookhaven Science Associates, a limited-liability company founded by the Research Foundation of the State University of New York, for and on behalf of Stony Brook University, the largest academic user of Laboratory facilities; and Battelle Memorial Institute, a nonprofit, applied science and technology organization. Visit Brookhaven Lab’s electronic newsroom for links, news archives, graphics, and more (http://www.bnl.gov/newsroom) or follow Brookhaven Lab on Twitter (http://twitter.com/BrookhavenLab).


DOE’s Office of Science is the single largest supporter of basic research in the physical sciences in the United States, and is working to address some of the most pressing challenges of our time. For more information, please visit science.energy.gov.