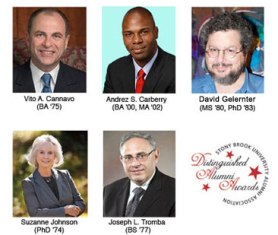 STONY BROOK, N.Y July 19, 2012 – Five prominent graduates of Stony Brook University have been named recipients of the 2012 Distinguished Alumni Award, which represents The Stony Brook Alumni Association’s highest honor.  All will be honored at an awards dinner on November 13, 2012 at Flowerfield in St. James, NY.

Dr. Sherry Sussman ’91, ‘95, president of the Stony Brook Alumni Association, noted that each individual honoree has made extraordinary contributions, ranging from corporate and civic leadership to innovative research and artistic achievement. “As different as their paths to success have been, all of our recipients share a common bond,” said Sussman. “They all chose to transform talents into skills that make the most of their Stony Brook experiences. Each deserves special recognition for how well they used their time at the University as a foundation for discovering, reshaping, and enriching the world around them.”

Vito Cannavo ’75 is a partner in the firm of Sullivan, Papain, Block, McGrath & Cannavo, one of the leading personal injury firms in the nation. Mr. Cannavo is in charge of one of the firm’s General Negligence departments. He has won numerous multi-million dollar verdicts and settlements in medical malpractice, premises liability, motor vehicle and firefighter- related litigation.  Mr. Cannavo is currently serving as President of the Columbian Lawyers Association of Brooklyn.  He has been listed in New York magazine and Super Lawyers magazine as one of the top lawyers in New York, and he has received the highest rating (AV®) from Martindale-Hubbell Peer Review Ratings. He has also been listed in The Best Lawyers in America. Mr. Cannavo resides in Staten Island, NY.

David Gelernter, PhD, ’80, ‘83 is professor of computer science at Yale, contributing editor at the Weekly Standard, former board member of the National Endowment for the Arts, and regular contributor to the Frankfurter Allgemeine Zeitung. His books include Mirror Worlds, the novel 1939, the memoir Drawing Life, and others. He’s published essays, fiction and reviews in Commentary, The Weekly Standard, Wall Street Journal, National Review, ArtNews, Washington Post, Los Angeles Times, Scientific American and many others. His essays are widely anthologized.  The first museum show of his paintings will open at the YU Museum in Manhattan this fall; his next book, America-Lite, will be published June 19. Dr. Gelernter resides in Woodbridge, CT.

Suzanne Johnson, PhD ‘74 is a Distinguished Research Professor at Florida State University (FSU) College of Medicine and 2012 President of the American Psychological Association.  She received her B.A. in psychology from Cornell and her Ph.D. in clinical psychology from SUNY at Stony Brook.  From 2002-2010, she served as the first Chair of the Department of Medical Humanities and Social Sciences a FSU College of Medicine in Tallahassee.  Prior to that time, she was a distinguished professor and director of the Center for Pediatric Psychology and Family Studies at the University of Florida Health Science Center in Gainesville.  Dr. Johnson has numerous publications in the areas of pediatric psychology and clinical health psychology and has received many research, teaching and service awards.  She has over 30 years of continuous research funding from the National Institutes of Health, including a Research Career Development Award.  Dr. Johnson resides in Tallahassee, FL.

Joseph L. Tromba, M.D., ‘77 received his medical training at the University of Catania, Italy, where he graduated with honors.  Dr. Tromba was a developer and founding member of the Endoscopy Center of Long Island, one of the largest free-standing ambulatory endoscopy centers on the east coast. Dr. Tromba is an attending physician at Winthrop University Hospital and a teaching affiliate of Stony Brook Medical School. He has published articles in peer-reviewed journals. Dr. Tromba is an active participant in the Internal Medicine and Gastroenterology fellowship teaching programs at Winthrop University Hospital and has been nominated for Teaching Attending of the Year.  He has served as Adjunct Professor of gastrointestinal physiology at Hofstra University.  He is a Fellow of the American College of Physicians and the American College of Gastroenterology.  Dr. Tromba resides in Garden City, NY.

Andrez S. Carberry, ’00, ‘02 is the Employment Counsel for Avon Products, NA.  Prior to joining Avon, for several years Mr. Carberry served as an Associate Attorney at Fox Rothschild, LLP (New York City) and as Associate Corporate Counsel for the Employment and Labor Division of the New York City Labor Department. Mr. Carberry serves as an adjunct professor of law at Hofstra University School of Law.  Mr. Carberry has numerous honors to his credit including the Legal Rookie of the Year Award, New York City Law Department (2005-2006) and recognition as one of New York’s “Rising Stars” by New York Super Lawyers (2011). He was selected for the New York State Bar Association Labor and Employment Section Diversity Fellowship Program for 2011-2012. He also serves on the board of directors for the Pajama Program, a New York City-based charity that provides new pajamas and books to underprivileged children who are abused, orphaned or fostered. Mr. Carberry resides in New York, NY.

“This year’s Distinguished Alumni Award recipients embody the personal and intellectual transformation that takes place from the student experience at Stony Brook University,” said Matthew Colson, Stony Brook Alumni Relations Executive Director. “ The Alumni Association and Stony Brook are extremely proud to recognize and share their success with them on this very special occasion.”