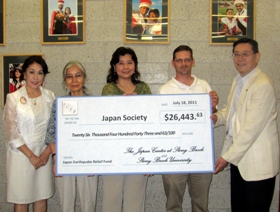 STONY BROOK, N.Y., July 20, 2011 – The devastating earthquake and tsunamis struck northeastern Japan on March 11. Seeing the scale of the destruction and the loss, it took no more than one day for the Japan Center at Stony Brook (JCSB) to explore the possible ways to help the victims and initiate a relief effort.

A campus response team for the tragedy in Japan was formed on March 15 through the Office of the Dean of Students, anchoring the resources in the JCSB and a website “Tragedy in Japan: Campus Response” was established, presenting President Samuel L. Stanley’s message on its homepage.  In the following week the team leaders, Jeffrey Barnett and Eriko Sato, received an overwhelming number of emails from those who wanted to help.

Collection boxes were placed at seven locations on campus with the help of Interfaith Center and Faculty Student Association. Three lectures on the tragedy in Japan by expert scholars were added to The Provost’s Lecture Series.

Right after the first lecture on March 23, the members and friends of JCSB including faculty, staff, students, and local community residents gathered at the Charles B. Wang Center and shared fundraising ideas, collaborating with many departments, centers, programs, and student organizations. They organized many fundraisers featuring lectures, music, performances, bake sales, lunchbox sales, T-shirt sales, film screenings, origami folding, raffles, games, and more. The details can be found at the Japan Center’s website.

The funds collected and forwarded to Japan Society by the JCSB and some units on campus totaled $26,443.63 by the end of June, of which $15,401.13 was sent to Japan Society through Brookhaven National Laboratory for matching by Brookhaven Science Association. There were also some funds sent to American Red Cross.

The JCSB also assisted local schools for their fundraisers by providing support for translation, activities, and performances.  The JCSB President, Iwao Ojima, states that we still need to continue relief efforts for Japan, but the numerous activities that the JCSB organized in such a short time have raised a considerable awareness about the disaster and taught our students how to be compassionate global citizens.