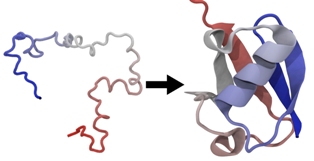 Scientists at Brookhaven National Laboratory and Stony Brook University have been awarded two million processor hours on a state-of-the-art supercomputer to collaborate on a protein structure project.

STONY BROOK AND UPTON, NY, July 17, 2012
— Scientists at the U.S. Department of Energy’s (DOE) Brookhaven National Laboratory and Stony Brook University have been awarded processing time on a new supercomputer at Oak Ridge National Laboratory to study how proteins fold into their three-dimensional shapes.

Proteins, which account for one-quarter of our dry body mass, are made up of different sequences of amino acids. While these sequences are relatively well understood, the myriad ways in which the amino acid chains fold and curl are still difficult to predict.

“This is not a matter of just curiosity. Most medicines interact with proteins and alter their behavior,” explained Stony Brook biochemist Alberto Perez, a postdoctoral fellow in the
Laufer Center for Physical and Quantitative Biology
, one of the lead researchers on the project. “If we want to design better medicines, we need to know what proteins look like.”

The award, which comes from the DOE’s Advanced Scientific Computing Research Leadership Computing Challenge, is for up to two million processing hours on the Titan supercomputer at Oak Ridge. Titan is an upgrade of Jaguar, a supercomputer that was recently named the sixth most powerful in the world by the TOP500 ranking system. Some scientists believe that Titan will contend for the number-one spot when it comes online later this year.

Titan has an unusual configuration: it will run on graphical processing units (GPUs) in addition to central processing units (CPUs). GPUs, originally developed by the technology company NVIDIA to render images in video games, are particularly efficient for repetitive tasks. By re-appropriating GPUs to solve scientific problems, Titan will become part of a burgeoning new approach in computational analysis.

Perez’s team will use Titan to run AMBER, a software package that simulates the effect of different force fields on organic molecules such as proteins to determine the most likely folding configuration. This method is a fast and effective complement to conventional protein imaging methods such as x-ray crystallography or nuclear magnetic resonance imaging.

“With the GPU port to AMBER, we are able to obtain in days in one single GPU the sampling that we were able to accomplish in several months of simulation using multiple CPUs,” said Perez.

The trick is finding the right set of conditions to limit AMBER’s massive search. The team believes they will be successful by focusing on the “first principles” that govern physical interactions in molecules while simplifying the representation of electron and nucleus behavior. These restraints are built into AMBER’s classical molecular dynamics machinery.

The team plans to test their approach in the Critical Assessment of Protein Structure (CASP), a competition in which groups have just three weeks to guess at a particular protein’s folds. This is not enough time to run a true experiment, so most groups try to compare and contrast the protein to known structures. Having the opportunity to run a simulation on Titan will be a big advantage.

“Getting into the competition is part of the motivation, but it’s not the whole story,” said Yan Li, a physicist at Brookhaven. If their model scores well against CASP’s experimentally derived structure, then they want to apply their approach to membrane proteins, which are important therapeutic targets that are particularly difficult to crystallize. “Eventually, we want to make the method more rigorous,” Li said.

“It’s not just inter-institutional. It’s interdisciplinary. We want to take advantage of the expertise of biology, chemistry, and physics,” Li said.