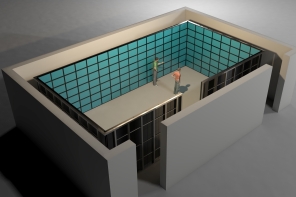 Known as the “Reality Deck,” the Immersive Giga-pixel Display will be a 40′ x 30′ x 11′ high room in Stony Brook University’s Center of Excellence in Wireless and Information Technology (CEWIT) containing 308 LCD display screens driven by an 85-node graphics computing cluster that rivals the performance of modern supercomputers. And while it will not be quite the simulated reality environment found on the starship Enterprise, it will fully immerse visitors in 1.25 billion pixels of information, approaching the visual acuity of the human eye, according to the project director, Arie E. Kaufman, Ph.D., Distinguished Professor and Chair of the Computer Science Department and Chief Scientist at CEWIT.

The $1.4 million grant, which will be matched by $600,000 from Stony Brook for a total of $2 million, is for three years. Dr. Kaufman said he expects the Realty Deck facility to be constructed in about a year.

“What a wonderful validation of the cutting edge research going on in imaging at CEWIT,” said President Samuel L. Stanley, Jr., M.D. “This support from the NSF will help us break new ground in a number of critical areas including advanced medical imaging.”

Dr. Kaufman calls the Reality Deck a “unique tiled display environment…with more than a billion pixels that can provide a life-like, realistic immersion into the data to be explored and reasoned with. This revolutionary facility is a one-of-a-kind exploration theater. It is an engineering feat – a unique assembly of hundreds of LCD displays, graphics cluster, sensors, communication, computer vision and human-computer interaction technologies to deliver a holistic system with a significant societal and research and development value.”

Dr. Kaufman said the facility will have applications far beyond the research community. “It’s a revolutionary exceptional display, which will probably revolutionize Hollywood,” he said.

But Hollywood is not the application for which the Reality Deck was envisioned. Rather, it will allow for incredibly detailed viewing of scans from the University Medical Center’s new 320-slice computed tomography (CT) scanner for virtual colonoscopies and rapid diagnosis of acute chest pain patients. Other proposed projects include satellite imaging, nano electronics, climate modeling, micro tomography, survey telescopes for astronomical applications, detecting suspicious persons in a crowd, news and blog analyses. “Any application that involves a tremendous amount of data,” Dr. Kaufman said.

Among the government agencies already signed up to use or fund applications of the Reality Deck are Brookhaven National Laboratory, Department of Defense, National Science Foundation, Air Force, NASA and the National institutes of Health as well the University of Maryland. Stony Brook is also working with private companies to produce LCD screens and other equipment made to exact specifications to produce the greatest detail possible.

“This facility will further advance the research impact of CEWIT on the national and international research agenda in national security, healthcare and energy,” said Yacov Shamash, Vice President for Economic Development and Dean of the College of Engineering and Applied Sciences. “It will result in greater partnerships with industry and help create new technologies that will lead to new high technology jobs.”

Dr. Kaufman was a pioneer in developing 3-D Virtual Colonoscopy systems that now provide patients with a non-invasive cancer screening alternative. A series of patents was awarded to Stony Brook for his work during the past decade, and 3-D Virtual Colonoscopy was approved for colon cancer screening in the United States by the Food and Drug Administration in 2004. In 2008 Siemens Healthcare and another CT manufacturer signed landmark non-exclusive license agreements with the University for the portfolio of innovations related to performing three-dimensional virtual examination, navigation and visualization, including the virtual colonoscopy.