Influenza Immunization Bill Passed For Families Of Babies In NICU 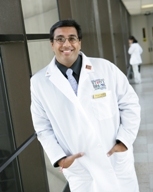 Influenza Immunization Bill Passed For Families Of Babies In NICU

In early June, the New York State Senate and Assembly passed the Influenza Immunization Bill (Bill A. 876-A) which requires hospitals with a neonatal intensive care unit (NICU) to offer flu vaccine shots to parents and family members of newborns being treated in NICU. The bill, based on the research of Dr. Shetal Shah, Assistant Professor of Clinical Pediatrics and a Neonatologist at SBUMC, is expected to save hundreds of thousands of dollars in healthcare costs and help protect thousands of newborns each year.

The bill was introduced in the Assembly by Health Committee Chair, Richard N. Gottfried (D-Manhattan) and in the Senate by Thomas K. Duane. It is based on a 2005 national resolution adopted by the American Academy of Pediatrics based on Dr. Shah’s work.

The bill is now before Governor David Paterson for his signature to make it law.

For the past three years, the Division of Neonatology at Stony Brook has offered mothers and fathers of admitted infants the trivalent inactivated influenza vaccine. Vaccination of these parents helps prevent transmission of influenza to the infants, who are at very high risk for death and hospitalization from the disease.  The newborns themselves cannot be vaccinated because their immune systems are too underdeveloped.

In 2005, Dr. Shah contacted the local Chapter of the American Academy of Pediatrics about incorporating the work into a proposal for a state law. After briefing Assembly Member Gottfried in 2006, the AAP helped bring together a coalition of support, including multiple medical societies, and regional departments of health.

“This is a common-sense health measure,” said Assembly Member Gottfried.  “It shows what can be done when health care professionals reach out to their elected officials and let us know what needs to be done.”

“I am proud to have sponsored this bill which we hope will be an important tool for helping to prevent flu infections in infants,” said Senator Thomas K. Duane (D, WFP Manhattan). “Parents can transfer the infection to their newborns unintentionally because newborns cannot be vaccinated.  This bill will help curtail preventable flu infections so that no young child should have to suffer.”

Data on the program, published in Pediatrics, the Journal of Perinatology, Hospital Medicine and the Archives of Pediatric and Adolescent Medicine helped demonstrate the success of hospital-based immunization to parents.

Patients younger than six months are at greatest risk of dying from flu-related illnesses. While influenza may be a “nuisance” illness to healthy adults, it is a major cause of illness for premature babies with lung and heart problems. Unlike older children, babies less than six months old cannot be directly immunized against influenza because their immune systems are still so fragile. As a result, the Center for Disease Control has recommended influenza vaccination for all parents of children from six months of age to 59 months of age.

The Division of Neonatology at Stony Brook University Medical Center (SBUMC) recognized this risk and need for parental vaccination back in November of 2006 with the implementation of a program in which the parents of newborns in the Neonatal Intensive Care Unit (NICU) received a free flu vaccine while spending time with their child in the NICU.

The vaccination, through this bill, will be voluntary and will not be administered to previous recipients or individuals deemed “medically inappropriate” for vaccination. It requires hospitals to adopt a policy which establishes procedures to enforce the bill and allows for the Commission of Health to waive vaccination requirements as a result of vaccine shortages.

“Most parents of NICU babies spend a great deal of time at their newborn’s bedside, so they don’t often have the time to get to a physician’s office during business hours for a flu shot,” says Dr. Shah.

“By immunizing them on the Unit, we are marrying access to healthcare with convenience in the NICU.”

Dr. Shah presented his research on the parent immunization program at the Society of Hospital Medicine’s 2006 Annual Meeting where it received the “Best Innovation” program award.

“Studies show the most likely person to give influenza to a premature infant is a parent,” says Dr. Shanty Sridhar, Director of the Division of Neonatology at Stony Brook University Medical Center.  Since November 1, 2006, neonatologists at Stony Brook have delivered flu vaccines to parents of NICU babies.

“Immunizing parents is part of our total commitment to caring for newborns in the NICU.”

Stony Brook University Medical Center is home to Suffolk County’s only Regional Perinatal Center caring for critically ill newborns. A team of seven neonatologists (doctors who specialize in the care of newborns) provides the only around the clock in hospital care for newborns in Suffolk County. The NICU at Stony Brook can care for up to 40 babies at a time, and treats more than 825 premature, sick and injured babies each year. More than 150 infants and 125 high risk pregnant women are transferred annually from other hospitals in the region to the Regional Perinatal Center. More than 100 specially trained nurses care for families in the NICU. The Obstetric and NICU transport teams include specially trained doctors, nurse practitioners, nurses, paramedics and respiratory therapists.