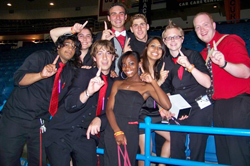 The Stony Brook University Residence Hall Association (RHA) represents over 8,000 undergraduate students who live on the Stony Brook campus. The National Residence Hall Honorary (NRHH) is a national leadership honor society that represents the top 1% of all residential student leaders. These “sister” organizations are part of a national system, known as the Association of College and University Residence Halls (NACURH), which represents over 400 colleges and universities from the United States, Canada, Mexico, Australia, and Qatar.