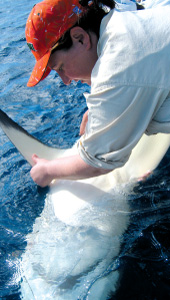 Dr. Ellen Pikitch tagging a shark for monitoring. The decline in shark populations due to unsustainable fishing has been implicated in causing a trophic cascade with major consequences for marine ecosystems.


STONY BROOK, NY, July 6, 2010 – A compendium on trophic cascades and how they operate in the world’s major ecosystems has been published for the first time. The term “trophic cascades” refers to the follow-on effects of top predator removal from an ecosystem, and, until now, there has not been a comprehensive synthesis of this phenomenon.

Evidence accumulated in this volume indicates that trophic cascades operate in nearly all ecosystems around the world, both at sea and on land. An example of a visibly evident effect of a trophic cascade in the United States is the steep increase in deer populations across the country following the eradication of gray wolves, cougars, and other large predators. According to a study presented in the book, this trophic cascade has led to habitat degradation, species loss, and contributed to ecosystem collapse.

To develop a comprehensive synthesis on trophic cascades, the Institute for Ocean Conservation Science at Stony Brook University provided support for leading scientists to convene a workshop in which 21 scientific experts on the ecological roles of large predators participated. The outcome of the workshop is the recently published book, Trophic Cascades: Predators, Prey, and the Changing Dynamics of Nature, and it includes chapters written by workshop participants and others, plus a foreword by Dr. Ellen K. Pikitch, Executive Director of the Institute for Ocean Conservation Science.

“This first comprehensive work on trophic cascades is excellent, thorough, and timely,” states Dr. Pikitch in her foreword. “The reader will be treated to accounts of trophic cascades akin to adventure stories, full of interactions, intrigue, unexpected consequences, and the discovery of pattern and order against a backdrop of noise and environmental degradation. The studies span the furthest reaches of the planet and include work in some of its most remote and pristine ecosystems,” she continues.
According to Dr. Pikitch, the scientific evidence featured in this book shows that top-level predators are essential in maintaining the structure, function, and biodiversity of most natural ecosystems. For example, a study featured in the book discusses how the decimation of great sharks in the mid-Atlantic ocean off the coast of the United States may be linked to the collapse of a once-important shellfishery.

“This book provides additional fuel for the need to shift away from a species-by-species management approach to a more holistic, ecosystem-based one,” commented Dr. Pikitch.