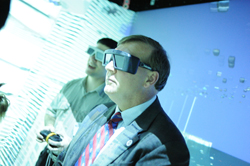 STONY BROOK, N.Y., June 28, 2010 – Stony Brook marked the first anniversary of its Center of Excellence in Wireless and Information Technology (CEWIT) facility with an Open House Celebration on Monday, June 28, 2010 at 1 p.m. During the open house, building tours were offered, during which

researchers demonstrated their inventions and applications developed over the past year at the 100,000-square-foot, state-of-the-art facility, including:


Virtual Reality Lab: Transport yourself to virtual worlds by entering the five-walled Immersive Cabin (aka “The Cave”). Take virtual tours of future SBU buildings and fly over Manhattan circa 2150. Experience the cutting-edge medical diagnostic technology of the Immersive Virtual Colonoscopy through the visualization of noninvasive CT scans for colon cancer screening.

GPU-accelerated Simulation and Visualization of Flow Demo: Witness the computational power of the GPU (modern graphics processor) or the GPU-cluster harnessed to accelerate applications that previously required supercomputers. See interactive simulations and visualization of processes such as the movement of a jellyfish, melting of wax statues, soap bubbles blowing in the wind, and the cooling of a pressurized water nuclear reactor during an accident.

Reality Deck Poster: Break the barrier between illusion and reality with CEWIT’s RealityDeck, which will be the world’s largest visualization facility with more than 1.2 billion pixels worth of resolution.

Digital Media Lab: Experience SmartStep, a kinesthetic math game developed with funding from NSF; WriteOn, a handwriting recognition application that tests students’ spelling and penmanship,; and iSign, a speech recognition application that translates spoken English to American Sign Language, developed with the Cleary School for the Deaf in Lake Grove.

Vision and Imaging Processing Lab: See Depth-from-Defocus and Multi-stereo 3D Imaging with a camera system that can extract depth or distance information from just a few defocused images and use this information to accomplish fast autofocusing.

News and Blog Analysis Laboratory: See the power of the Lydia news/blog analysis system to identify trends in volume and sentiment for all the millions of different people, places, and things in our terabyte-scale news/blog corpora. The system extracts social networks of people from news/blog text, and identifies both spatial and temporal distributions in entity frequency and sentiment.  Check out what Lydia thinks happened to Tiger Woods over the past year.

Created in 2003 to capitalize on the IT revolution, spur economic growth, advance scientific research, and develop the technologies of tomorrow, CEWIT consists of five divisions: Network Technologies, Software Systems, Communications and Devices, Systems and Infrastructure, and Medical. It has received more than $100 million from federal and industry sponsors, and has resulted in 123 invention disclosures, 36 U.S. patents issued and 12 licenses, as well as more than 420 research publications. The center has more than 70 affiliated faculty and staff, 190 Ph.D. students and 180 MS students engaged in research, an industrial advisory board, an international advisory board, a technology council and a project management team with superior experience handling the needs of industry. On February 23, 2010, CEWIT opened a research center in Korea focused on improving current IT related technology and building new cutting-edge electronic technology.

“We have not yet begun to tap the potential that is here at CEWIT,” said Samuel L. Stanley, Jr., M.D., President of Stony Brook University. “It is rewarding to see all that can be done with innovation and technology to help our institutional partners and others solve their challenges with wireless technology. Give them a problem, they will solve it.”

“CEWIT’s mission is to keep our state and our nation at the forefront of the continuing information revolution,” said Yacov Shamash, Vice President for Economic Development, and Dean of the College of Engineering and Applied Sciences at Stony Brook University. “The wireless wave is still gathering force and CEWIT will keep our partners on the crest.”

“Since its inception, CEWIT has worked hard to build strategic alliances and business partnerships among the academic, scientific, and business communities,” said Satya Sharma, Ph.D., M.B.A., Executive Director of CEWIT. “Its partners include some of the world’s best known and most sophisticated giants of wireless and information technology. The Center is building on these achievements and has laid the foundation of research and development (R&D) partnerships with its partners and sponsors, and with other internationally known research institutions.”

The first building constructed in the Stony Brook University Research and Development Park, the CEWIT facility includes 40 research laboratories and a 7,000 square-foot incubator space. CEWIT is a $250 million government-industry-academic partnership leading the next wave of the wireless and information technology revolution. Its mission is to conduct world class interdisciplinary research in the emerging critical technologies, foster new enterprise development, address the technology worker shortage and become a world leader in wireless and information technology.

Part of the State University of New York system, Stony Brook University encompasses 200 buildings on 1,450 acres. In the 50+ years since its founding, the University has grown tremendously, now with nearly 24,700 students and 2,200 faculty and is recognized as one of the nation’s important centers of learning and scholarship. It is a member of the prestigious Association of American Universities, and ranks among the top 100 national universities in America and among the top 50 public national universities in the country according to the 2010 U.S. News & World Report survey. Considered one of the “flagship” campuses in the SUNY system, Stony Brook University co-manages Brookhaven National Laboratory, joining an elite group of universities, including Berkeley, University of Chicago, Cornell, MIT, and Princeton that run federal research and development laboratories. SBU is a driving force of the Long Island economy, with an annual economic impact of $4.65 billion, generating nearly 60,000 jobs, and accounts for nearly 4% of all economic activity in Nassau and Suffolk counties, and roughly 7.5 percent of total jobs in Suffolk County.