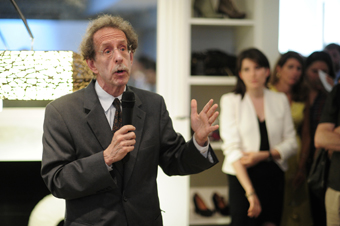 Howard Schneider, Dean of the Stony Brook University School of Journalism, speaks at the kickoff event to establish The Marie Colvin Center for International Reporting.

STONY BROOK, NY, June 25, 2012 – The Stony Brook University School of Journalism has launched a fundraising campaign to establish a Center for International Reporting in memory of Marie Colvin, the acclaimed war correspondent and Long Island native who was killed last February while reporting in Syria.

The event was supported by Christiane Amanpour, Sir Harold Evans, Human Rights Watch, People Magazine, and VII Photo, all of whom lent their names to the event in support of the endeavor. A silent auction of VII photography took place, featuring prints by Lynsey Addario, Ashley Gilbertson, Ron Haviv and Seamus Murphy.

Known for her moving accounts of innocent civilians afflicted by war and for her courage, tenacity and dedication to eyewitness reporting, Colvin, 56, was killed by a rocket attack in February of 2012 while covering the violent crackdown by Syrian government forces in the city of Homs. Colvin, who worked for The Sunday Times of London at the time of her death, grew up in East Norwich and attended Oyster Bay High School.

Marie Colvin’s career spanned 30 years and took her to conflict zones around the globe, including Iraq, Libya, Zimbabwe, Chechnya and Kosovo. In later years, she was recognizable by a trademark black eye patch, which she wore after losing her left eye to shrapnel from an attack by a Sri Lankan soldier. Her illustrious career was characterized by many such dramatic tales – from an eight-day mountain trek with Chechnyan rebels to her aid in the rescue of 1,500 women and children from a besieged United Nations compound in East Timor – adding up to a remarkable body of work and a singular legacy.

“The need for front line, objective reporting has never been more compelling,” Marie said a speech in London in 2010. “We must remember how important it is that news organizations continue to invest in sending us out at great cost, both financial and emotional, to cover stories.”

In this same spirit, the mission of The Marie Colvin Center for International Reporting at the Stony Brook University School of Journalism will be:

– To nurture and grow the next generation of overseas reporters by establishing a travel fellowship to give public university students the opportunity to go on foreign reporting trips, and by teaching specialized curriculum developed by a diverse faculty with decades of international field experience.

– To raise awareness about the need for robust international coverage through the Marie Colvin Distinguished Lecture Series, which will bring distinguished foreign correspondents to Stony Brook to deliver public lectures and meet with students.

– To cement Marie’s legacy through the creation of a journalist-in-residence fellowship, which will reward outstanding and tenacious overseas reporting by inviting foreign correspondents to Stony Brook for a semester of scholarship, writing and teaching.

Stony Brook University is home to the only journalism school in New York State’s public higher education system. The journalism school committee working to establish the Marie Colvin Center for International Reporting is led by Founding Dean Howard Schneider, the longtime Newsday managing editor and editor during whose tenure the Long Island newspaper won Pulitzers for its overseas coverage of Rwanda, Bosnia and Iraq; Associate Dean Marcy McGinnis, former CBS News Senior Vice President, News Coverage, who was at the helm during the wars in Afghanistan and Iraq; and Assistant Professor Ilana Ozernoy, former foreign correspondent for U.S. News & World Report, who covered the wars in Afghanistan and Iraq, where she helped establish and run the magazine’s Baghdad bureau.

“I met Marie during the war in Iraq,” said Professor Ozernoy. “I was only 25 at the time, and I remember being in complete awe of Marie Colvin. She was an indefatigable reporter, a courageous woman; larger-than-life. We will create this center to honor how Marie lived her extraordinary life: as an inspiration to young journalists, and to young women in particular.”

The Colvin family has endorsed the Journalism School’s plans with a seed donation from the Marie Colvin Memorial Fund. “Marie was always a generous colleague and mentor to younger journalists, and I know she would be extremely proud of the Center,” said Cathleen Colvin, Marie’s sister. “It reflects the way Marie herself developed as a journalist and a writer – on the job experience coupled with advice and support from experienced journalists.”

For more information or to make a donation, please visit: www.stonybrook.edu/mariecolvin.