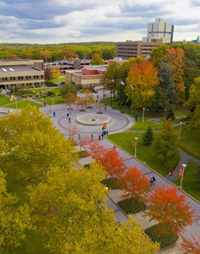 
STONY BROOK, NY, June 24, 2009 – Stony Brook University President Dr. Shirley Strum Kenny announced today that the University has received gifts and pledges totaling nearly $360 million in its first-ever capital campaign, “The Emergence of Stony Brook.”  The seven-year campaign, with an original goal of $300 million, is the largest ever of any campus of the State University of New York (SUNY) system.  The campaign officially ends on June 30, the end of the University’s fiscal year and also the effective date of Dr. Kenny’s retirement, following 15 years as Stony Brook’s fourth president.

“This is a historic milestone, for Stony Brook University and for SUNY,” said New York State Governor David Paterson.  “During these harsh economic times, the enduring philanthropic commitment to SUNY Stony Brook is cause for optimism. It affirms both the centrality of public higher education to the future of our state and nation, as well as Stony Brook’s position as one of New York’s premier universities and a world leader.”

Sen. Charles Schumer echoed these sentiments, adding that, “The success of this campaign is a testament to the exceptional quality of the University and its faculty and students, but most especially to my dear friend Shirley Kenny. She is a creative and visionary leader and Stony Brook is privileged to have had her at its helm for these past 15 years. Indeed, under her leadership, Stony Brook has become undeniably linked to the educational, economic, cultural, and social fabric of Long Island.”


“It is a credit to Dr. Kenny’s leadership and Stony Brook University’s excellence in offering among the finest higher education degree programs that the first-ever capital campaign has exceeded all expectations,” said Senator Kenneth P. LaValle. “Having served for over 30 years as Chairman of the NYS Senate Higher Education Committee, I can say with great certainty that the investments made in Stony Brook University were well-placed and will help ensure the continued success of this fine institution.”


Congressman Timothy Bishop (D-NY1) added that, “I applaud the efforts of Dr. Kenny and her colleagues to secure a solid financial foundation for Stony Brook University. The unprecedented response from donors underscores the value of Stony Brook’s leadership in enabling more students and researchers to succeed, so America can continue to be a world leader for generations to come.”

Donors to the campaign set several new records for Stony Brook and for SUNY.  Through their foundation, Dr. Jim Simons, the legendary financier and former chairman of the University’s mathematics department, and his wife Dr. Marilyn Simons, who holds both doctoral and bachelor’s degrees from Stony Brook, became the University’s first $100 million dollar donors. Their total giving of more than $138 million includes a $60 million commitment announced last year to construct and endow the new Simons Center for Geometry and Physics. It represents the largest gift in the University’s history and the largest ever to any one of the 64 institutions in the SUNY system.

The campaign set a record also for the largest single non-cash ever received by a SUNY campus when it accepted and dedicated the Charles B. Wang Center in October 2002. The $52 million 120,000-square-foot building, which celebrates Asian and American cultures, was presented to the University by Mr. Wang, owner of the New York Islanders.

The campaign was buoyed also by a $10 million gift from Drs. Henry and Marsha Laufer, both former faculty members.  The majority of the gift, $8 million, is being used to establish an interdisciplinary research center bringing together experts in such fields as math, genetics, biochemistry, engineering, and computer sciences to achieve breakthroughs in biomedical research and health care.

“There is no smarter place to invest than in public higher education, and Stony Brook is an institution of remarkable stature worthy of such philanthropic investment,” said Richard L. Gelfond, CEO of IMAX Corporation and Chair of the Stony Brook Foundation Board of Trustees. “Thanks to the generosity of our friends and alumni, Stony Brook will continue its remarkable trajectory.  I’m extremely proud to be an alumnus of this institution.”

The campaign boasts more than 237,000 gifts from more than 54,000 donors. Moreover, the campaign has added more than $71 million in new gifts to the endowment of the Stony Brook Foundation, the separately governed 501(c)(3) charitable foundation which accepts and manages private gifts and grants for the University’s benefit. Most gifts have been designated by the donor for a particular purpose such as scholarships or research.

“The campaign has certainly lived up to its name, The Emergence of Stony Brook,” commented Lance King, the University’s Vice President for Advancement and President of the Stony Brook Foundation. “Thanks to unprecedented levels of giving from our alumni and friends and under Dr. Kenny’s leadership, the University has made tremendous strides in quality and reputation during the course of the campaign.  Those improvements have garnered national and international attention. Stony Brook has indeed ‘emerged,’ and we have many people to thank for helping us to do so.”

Part of the State University of New York system, Stony Brook University encompasses 198 buildings on 1,454 acres. In the 51 years since its founding, the University has grown tremendously, now with nearly 24,000 students and 2,100 faculty, and is recognized as one of the nation’s important centers of learning and scholarship. It is a member of the prestigious Association of American Universities, and ranks among the top 100 national universities in America and among the top 50 public national universities in the country according to the 2008 U.S. News & World Report survey. Considered one of the “flagship” campuses in the SUNY system, Stony Brook University is a driving force of the Long Island economy, with an annual economic impact of $4.65 billion, generating nearly 60,000 jobs. Stony Brook accounts for nearly 4% of all economic activity in Nassau and Suffolk counties, and roughly 7.5 percent of total jobs in Suffolk County.