SBU Scientist Participates In First U.S. Lunar Mission In More Than A Decade 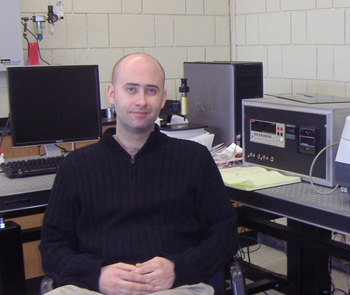 SBU Scientist Participates In First U.S. Lunar Mission In More Than A Decade

STONY BROOK, N.Y., June 22, 2009 — The launch of the Lunar Reconnaissance Orbiter (LRO) on June 18 marks the first step in NASA’s return to the Moon, and the first U. S. lunar mission in more than a decade. The scientific instruments on LRO will map the Moon in unprecedented detail, paving the way for humans to return to our nearest planetary neighbor in 2020.


Stony Brook Assistant Professor of Geosciences Timothy Glotch is a member of the Diviner Lunar Radiometer Experiment (DLRE) science team. Diviner will make high resolution maps of lunar surface temperatures that will help scientists understand the extreme thermal environment that astronauts will have to live and work in. Based on previous measurements and thermal models, it is believed that temperatures on the Moon reach as high as 400K (260.6°F/127°C) in the daytime and as low as 100K (-179.4°F/-173°C) at night.

Temperature measurements made by Diviner will have several other important uses. By comparing daytime and nighttime temperatures at the lunar surface, scientists will be able to map a property called thermal inertia which will allow them to determine which regions of the Moon have too many large rocks to safely land humans.

“Think of going to the beach on a sunny day. At 3:00 pm, the sand is very hot, but larger rocks are still quite cool. On the other hand, if you go to that same beach at night, the sand is cool, but the rocks are still warm, said Professor Glotch. That’s because the rocks need to absorb a lot more solar radiation to warm up, and it takes a long time for the rocks to re-emit that radiation and cool down at night.”

Diviner will also make high-resolution temperature maps of the lunar polar regions, searching for “cold traps” in areas of the moon that are permanently shaded. Diviner team members, led by Principal Investigator David Paige at UCLA, will work with scientists using the Lunar Exploration Neutron Detector (LEND), which will map the abundance of hydrogen on the Moon. Enhanced hydrogen abundance in cold-trapped regions of the Moon would be strong evidence for the presence of water ice. Cold-trapped water ice would allow future astronauts to “live off the land” and possibly reduce the cost of future human lunar exploration.

Diviner will make temperature measurements at multiple wavelengths in the infrared portion of the electromagnetic spectrum. Minerals emit unique radiation patterns, called infrared spectra, which will allow scientists to use Diviner as a mineral mapping tool. This capability of Diviner is particularly interesting to Glotch and his graduate students, who study the infrared spectra of minerals in his laboratory at Stony Brook University.

Diviner is currently scheduled to take its first data on July 4, 2009, followed by several weeks of instrument testing and calibration before it enters full mapping mode later this summer