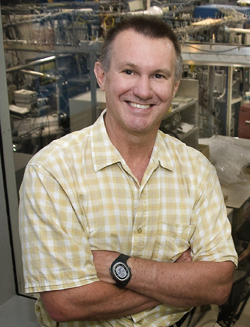 John Parise of the Departments of Geosciences and Chemistry honored


Professor Parise’s research accomplishments over the past 28 years haven brought him the highest level of international prominence within the closely linked communities of crystallography, mineral physics and solid state chemistry.  His success in continually raising the standards of research has garnered him key leadership positions in community-wide development of new experimental facilities, most notably at the Spallation Neutron Source at Oak Ridge National Laboratory, at the joint Photon Science Institute, sponsored by New York State and Brookhaven National Laboratory, and at the National Synchrotron Light Source II, now under construction at the Brookhaven National Laboratory.

“I am honored to be awarded this distinction,” said Professor Parise. “This designation is profound, and I invite the many students and post-docs who have been my collaborators, and my many colleagues on joint grants from the Department of Chemistry and Brookhaven National Laboratory, to share in this honor.”

“It is with great pride that we recognize SUNY’s most brilliant scholars and teachers and those whose service to the community and to SUNY merit the distinguished ranking,” said Board Chairman Carl T. Hayden. “We are grateful for their contributions to our students, to SUNY, the communities we serve and the body of knowledge in their chosen field of inquiry. The Board joins with the recipients’ families and campuses in celebrating their academic, service, research and teaching accomplishments.”

The Distinguished Professorship is conferred upon individuals at SUNY’s state-operated campuses who have achieved national or international prominence and a distinguished reputation within the individual’s chosen field. This distinction is attained through significant contributions to the research literature or through artistic performance or achievement in the fine and performing arts. The candidates’ work must be of such character that the individuals’ presence will elevate the standards of scholarship of colleagues both within and beyond the individual’s academic field. It must also be of such quality that students and scholars on other SUNY campuses could and do benefit by lectures and seminars, or other appropriate presentations the faculty members might bring to them. Appointment constitutes a promotion to the SUNY’s highest academic rank and is conferred solely by the SUNY Board of Trustees. The expectation is that individuals so appointed will be accorded such support as is appropriate to the individual’s academic endeavor, consistent with the resources of the campus, including a salary above the mean salary for full professors.

“SUNY has now conferred its highest faculty honor upon more than 850 current and retired professors from across the system,” said SUNY Chancellor Nancy L. Zimpher. “These honors recognize their extraordinary achievements as teachers, scholars and mentors, which are a tremendous source of pride for the State University.”

Part of the State University of New York system, Stony Brook University encompasses 200 buildings on 1,450 acres. In the 50+ years since its founding, the University has grown tremendously, now with nearly 24,700 students and 2,200 faculty and is recognized as one of the nation’s important centers of learning and scholarship. It is a member of the prestigious Association of American Universities, and ranks among the top 100 national universities in America and among the top 50 public national universities in the country according to the 2010 U.S. News & World Report survey. Considered one of the “flagship” campuses in the SUNY system, Stony Brook University co-manages Brookhaven National Laboratory , joining an elite group of universities, including Berkeley, University of Chicago, Cornell, MIT, and Princeton, that run federal research and development laboratories. SBU is a driving force of the Long Island economy, with an annual economic impact of $4.65 billion, generating nearly 60,000 jobs, and accounts for nearly 4% of all economic activity in Nassau and Suffolk counties, and roughly 7.5 percent of total jobs in Suffolk County. – See more at: http://commcgi.cc.sunysb.edu/cgi-bin/am2/admin.cgi#sthash.QDxzqRev.dpuf