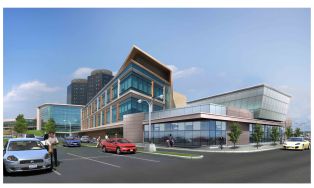 A rendering of the new CPEP Annex at Stony Brook University Hospital.

in attendance including faculty, staff and community members, Stony Brook University Medical Center (SBUMC) broke ground on its new Comprehensive Emergency Psychiatric Program (CPEP) Annex, a 10,000 square foot state-of-the-art patient care facility that will replace 2,050 square feet of outdated space. The new space will be located adjacent to the Emergency Room on the east side of the Medical Center, and is expected to be complete by fall of 2011.

The staff is comprised of specially trained psychiatrists, social workers, nurses, and nursing assistants who are committed to providing the best emergency psychiatric care.

“The new CPEP Annex will help to meet a growing demand for psychiatric services in Suffolk County and will triple the patient care space available in the existing facility, which has 6,000 visits annually,” said Dr. Mark Sedler, Chairman of the Department of Psychiatry and Behavioral Health at Stony Brook. “The new CPEP design emphasizes an enhanced psychiatric care environment to meet the needs of our patients.”

An overview of the state-wide CPEP program is available in the New York State Office of Mental Health 2007 Annual Report to the Governor and Legislature of New York State on Comprehensive Psychiatric Emergency Programs at http://bit.ly/97qlr6.