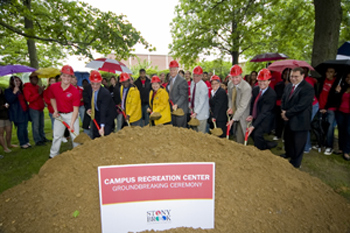 STONY BROOK, N.Y., June 10, 2009 – Inclement weather could not put a damper on the celebratory event that was the official ground breaking ceremony for the new Campus Recreation Center (CRC) at Stony Brook University on June 5. The $37.5 million 85,000 square-foot CRC is a student-oriented facility featuring contemporary work out space, space for a quality intramural program and for sports club team practice and competition.


The groundbreaking was lead by President Shirley Strum Kenny and former Vice President, Frederick R. Preston, ED.D., a major force behind this facility, working for many years with students to ensure that it would be appropriate to their needs. They were joined by faculty, staff, dozens of students, including student government leadership, past and present, as well as Senator John Flanagan, Assemblymen Steve Englebright and Michael Fitzpatrick and Brookhaven Town Councilman, Steve Fiore-Rosenfeld (class of 1990). Senator Ken LaValle, who was instrumental in securing funding for the CRC, was unable to attend but sent a congratulatory letter which was read by Associate Dean and Director of Student Life, Susan DiMonda.

During what was Stony Brook’s 28th groundbreaking since she was appointed President, Dr. Kenny said the Center is destined to become a beacon of activity and a new campus landmark.

“The Campus Recreation Center will open additional doors in fostering a campus climate that is student-oriented, a place where people are comfortable in sharing and enjoying each other,” she said.

The new facility will be located between the Sports Complex and the Student Union. The patio will serve as the entryway to each facility, and students, faculty, and staff would continue to access the Sports Complex for recreational swim, racquetball and squash.

“Student Life on campus is booming and the Campus Recreation Center will provide additional space for wellness programming, expand and enhance the indoor intramural program,” says Susan DiMonda. “It will also provide space for the 34 sport clubs for practices, competition, and equipment storage.”

The CRC is designed with glass windows spanning much of the exterior. It will be visibly prominent and inviting, providing those on the outside with a view of the many diverse activities available within, including a three court gym; an indoor multipurpose sport court; aerobic/martial arts rooms; spinning studio; cardiovascular, free weights, and weight machine area; jogging track; locker room facilities; and staff offices.

“I feel blessed having had an opportunity to participate in this ground breaking today, and in helping to bring this recreation center to reality,” said Dr. Preston. “I can promise you, along with my Soul Sister, Shirley that I will be back for the opening.”

Administrators and students have been working on this project since fall 1999 when an advisory board comprising student leaders and staff from the Office of Student Affairs and the Department of Campus Recreation met to discuss the concept of building a new Campus Recreation Center. These meetings were held in response to inquiries from the student body regarding the lack of recreational facilities on campus. In the weeks that followed the advisory group toured two new facilities at University of New Hampshire and Northeastern University. Upon returning to campus, it was evident that Stony Brook University was lacking a comprehensive component of student life – a Campus Recreation Center.  However, due to the lack of funding available the project was on hold until all of the necessary funds were secured.

Development of the CRC officially began in 2005 when Stony Brook secured $19.5 million for the project. It was later determined that an additional $18 million was needed to make the center comprehensive and contemporary. Sasaki Associates, Inc. of Boston, is the principle architectural firm on the project, and has much experience in recreation facility constructing as evidenced in their recent sports facility work at MIT, Cornell University, and the University at Albany.

For additional information, contact Susan DiMonda at (631) 632-7206 or by e-mail at: susan.dimonda@stonybrook.edu