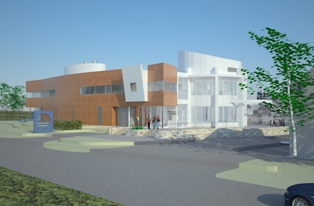 A rendering of the new Marine Sciences Center.

SOUTHAMPTON, NY, June 8, 2012 – The Southampton Campus of Stony Brook University is set to begin construction on a new state-of-the-art Marine Sciences Center for the School of Marine and Atmospheric Sciences (SoMAS), which will replace and expand the current waterfront marine sciences research and teaching facilities.

The new 15,000-square-foot Marine Sciences Center, made possible through $6.9 million secured in the NYS budget by Senator LaValle and Assemblyman Thiele, is being developed to support the growth of the SoMAS undergraduate marine science and environmental science programs, and to play a key role in their ability to perform groundbreaking research into a variety of issues facing Long Island and the world today. The total cost of the project is projected at $8.348 million with the remaining funds coming from Stony Brook University.

At the ceremony, Dr. Stanley expressed gratitude to Senator LaValle and Assemblyman Thiele for their efforts in securing the funds to help make this project a reality.

“The new Marine Sciences Center will play a key role in keeping this school as the premiere marine undergraduate program on the east coast,” said President Stanley. “It will expand opportunities for our students and faculty to conduct waterfront marine research and play a key role in augmenting SoMAS’ ability to perform groundbreaking studies in a variety of issues facing Long Island and the world today.”

“This announcement begins the process to energize the Southampton campus,” said Senator LaValle, during his remarks at the groundbreaking ceremony. “It’s a sign that the State and Stony Brook are serious about the Southampton site and investing in the economy of this area. The new Marine Sciences Center will be recognized as a beacon by people from afar.”

“The sun is shining on the Southampton campus today,” said Assemblyman Thiele at the ceremony. “We’ve always had two particular strengths – Marine Sciences and the Writing Program – here at Southampton,” he said. “I choose to look forward to the future of this campus and its great potential – it’s going to be a shining light and a gem for SUNY.”

“Stony Brook is the center of SUNY’s renowned marine research efforts and this new state-of-the-art facility will give SUNY students and faculty the tools they need to advance our understanding of issues that have global ramifications,” said SUNY Chancellor Nancy L. Zimpher. “I want to commend President Stanley and his team for having the vision to bring such an important asset to SUNY, and Senator LaValle and Assemblyman Thiele for their continued support.”

“The construction of the Marine Sciences Center at Southampton will ensure that Stony Brook will continue to be a world leader in marine science education and research – areas of critical importance to the world in the 21st Century, and especially to the people of Long Island,” said Provost Assanis. “I believe that the construction of the Marine Sciences Center and other Stony Brook initiatives, such as the New York Center for Computational Science and the Consortium for Interdisciplinary Environmental Research, make us a great training ground for the world’s future thought leaders – people who will address and conquer the substantial environmental problems we face.”

The new two-story facility will enable SoMAS to offer more classes with rich experiential components such as Marine Biology, Marine Mammals, Ichthyology, Physical Oceanography and more, which will be taught at the new Marine Sciences Center. Currently SoMAS is ranked sixth in the United States among marine and atmospheric sciences graduate programs, according to the National Research Council.

“The new waterfront facility will bring the School of Marine and Atmospheric Sciences up to par with our peers for marine-related research and education,” said Minghua Zhang, Dean, School of Marine and Atmospheric Sciences at Stony Brook. “We longed for such a building for many years and are very grateful to all who helped make it a reality,” he said. “This is an investment for the future of our students, the university and the people of Southampton and the entire State of New York.” Also present at the ceremony to offer support for the new facility was Dr. David Conover, the former Dean of SoMAS and the current Director of the Division of Ocean Sciences with the National Science Foundation (NSF). Dr. Conover still retains a faculty appointment at SoMAS.

“The new teaching laboratories and classrooms will offer state-of-the-art science to more than 500 undergraduate majors at Stony Brook who come to Southampton specifically to learn marine science via hands-on experience,” said Christopher Gobler, Director of Academic Programs for SoMAS at Stony Brook Southampton. “The significantly more sophisticated seawater lab will facilitate next-generation research on both the causes and solutions for pressing marine environmental issues. I can say with confidence that with this building, SoMAS is poised to offer the best undergraduate marine science degree in the nation.”

“SoMAS has instilled in me a passion for marine science by facilitating hands-on research,” said Florian Koch, who received his PhD this year at the School of Marine and Atmospheric Sciences at Stony Brook University while conducting research at the Marine Science Center. “I am excited about the continuation of this rich tradition of academic and research excellence here in Southampton. This facility promises to keep undergraduate and graduate marine science education alive and well here on the east end of Long Island.”

The Marine Sciences Center will replace three small existing buildings and house a high-tech 2,500-square-foot Sea Water Lab with a computerized circulation system including four different temperature lines, as well as recirculation capabilities and quarantine and culture rooms. A titanium heat exchanger will be used to preheat or precool incoming sea water for substantial operational energy savings, as well as to reduce the overall size of the heating and cooling equipment.

Construction includes sustainable design features utilizing material that is sensitive both to experiments and the coastal marine environment, including energy recovery of ventilation air, daylighting of all normally occupied spaces, a low-static pressure ductwork system, high-efficiency lighting and a super-insulated exterior wall assembly. A LEED Silver rating is targeted at minimum.

Currently, there are more than 500 undergraduate students, 150 graduate students and 90 faculty and staff from 16 different nations working together at SoMAS to better understand how marine, terrestrial and atmospheric environments function and work in relation to one another. At Stony Brook Southampton, students can take courses that explore the natural flora, fauna and habitats of Long Island’s east end. SoMAS faculty and graduate students are engaged in cutting-edge research with important implications for Long Island’s coastal ecosystems, including studies of harmful algal blooms, shellfish, eelgrass, fisheries, ocean acidification, climate change and aquaculture.

SoMAS locations allow students and faculty the opportunity to explore and study a variety of habitats ranging from the open ocean to the largest metropolitan area in the United States, and to tap into resources at the nearby National Weather Service, Brookhaven National Laboratory and the Cold Spring Harbor Laboratory. SoMAS operates research and educational facilities at Stony Brook University, Stony Brook Southampton (including the forthcoming Marine Sciences Center with access to the Atlantic Ocean) and the Flax Pond Marine Laboratory on the Long Island Sound.