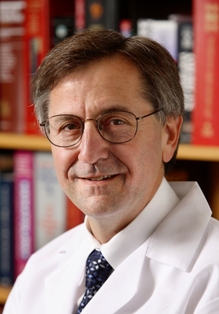 STONY BROOK, N.Y., June 8, 2010 – After a national search, Kenneth Kaushansky, M.D., M.A.C.P., the Helen M. Ranney Distinguished Professor and Chair, Department of Medicine at University of California, San Diego, has been appointed as Dean of the School of Medicine and Senior Vice President of the Health Sciences for Stony Brook University, announced President Samuel L. Stanley, Jr., M.D. Dr. Kaushansky, 56, joins Stony Brook in July, and will oversee the education, clinical and research components of the School of Medicine and the Health Sciences, which include the School of Dental Medicine, School of Health Technology and Management, School of Nursing and the School of Social Welfare. He will also have some oversight responsibility for Stony Brook University Medical Center, and oversight for the Long Island State Veterans Home.

Succeeding Dr. Richard N. Fine, who served as Dean since November 2005 and announced his intent to return to practicing medicine in his specialty of Pediatric Nephrology in July last year, Dr. Kaushansky joins a program poised for growth. With 25 academic departments, 21 residency training programs and 27 fellowship training programs, and as part of the only Academic Medical Center on Long Island, the School is on a consistent trajectory of increasing enrollment as part of its goal to help meet a growing need for physicians nationwide with 124 men and women enrolled in the class of 2012 – the largest incoming class ever. The School is also home to a $4 million, 6,000 square-foot Clinical Skills Center, a state-of-the art training center where medical students evaluate and diagnose patients through teaching modules that incorporate the use of actor patients and computerized mannequins that simulate disease.

A leading hematologist, Dr. Kaushansky had conducted seminal research on the molecular biology of blood cell production. His team has cloned several of the genes important in the growth and differentiation of blood cells, including thrombopoietin, a key regulator of stem cell and platelet production. He is an accomplished clinician, and he has been a champion of the need to train more physician-scientists who can bridge the gap between the laboratory and the clinical arena, translating research discoveries into improved treatments and technologies for the prevention, diagnosis and management of disease.

“We are very pleased that we are able to bring one of the leaders in academic medicine to Stony Brook University,” said Dr. Stanley. “As an administrator, researcher, educator and clinician, Ken will bridge many specialties as we move toward fulfilling our mission to strengthen existing relationships and forge new ones with researchers on our campuses, at Brookhaven National Lab and at Cold Spring Harbor Lab.”

“I am absolutely thrilled to join Stony Brook Health Sciences and the University community at large,” said Dr. Kaushansky. “For years I have followed the great progress made here on Long Island, and feel it’s the very right time to move the research, education and clinical missions to a new level. The vision shown by President Stanley and Provost Kaler, to help Stony Brook University join the ranks of the world-class universities, is something we should all share and aspire to.”

Dr. Kaushansky has been recognized for his scientific, educational and clinical contributions by election as a Master of the American College of Physicians, and to several honor societies and organizations, including the American Society for Clinical Investigation, the Association of American Physicians, the Institute of Medicine of the National Academies of Science and the American Academy of Arts and Sciences.

“Ken Kaushansky will help put Stony Brook University’s School of Medicine and Health Sciences on a fast track to recognition as a world-class program,” said Dr. Samuel Aronson, Director of Brookhaven National Laboratory. “I very much look forward to working with Ken and exploring a range of new, exciting collaborative opportunities between our respective institutions.”

“The combined leadership of Drs. Sam Stanley and Ken Kaushansky will ensure that the School of Medicine and Life Sciences at Stony Brook University will grow into a world leading research center and complement the research at Cold Spring Harbor Laboratory,” said Dr. Bruce Stillman, President and CEO, Cold Spring Harbor Laboratory. “We very much look forward to welcoming and working with Ken.”

“I am thrilled that we have been able to recruit Dr. Kaushansky to Stony Brook,” said Eric W. Kaler, Provost and Senior Vice President for Academic Affairs and Vice President for Brookhaven Affairs at Stony Brook University. “His outstanding record of achievement sets the stage for great success here, and I see his appointment as another big step forward for our institution.”

“Dr. Kaushansky’s appointment to Stony Brook University is a brilliant one,” said Eugene Braunwald, M.D., Distinguished Hersey Professor of Medicine, Harvard Medical School. “He has proven himself to be a creative investigator, an empathetic, skilled physician and talented educator who has the vision, leadership and vigor to take the Health Science Center to the highest level of excellence.”

“Ken Kaushansky is truly one of the nation’s leading physician scientists and most outstanding academic executives,” said Edward J. Benz, Jr., M.D., President, Dana-Farber Cancer Institute. “Stony Brook University is to be congratulated on its spectacular success in leading the institution to even greater levels of excellence and impact.”

“As one of the nation’s leading physician-scientists and academic leaders, Dr. Kaushansky will bring to Stony Brook a record of extraordinary achievements in research, education, patient care, and service to the community,” said Dr. Barry Coller, Vice President for Medical Affairs and Physician-in-Chief David Rockefeller Professor, The Rockefeller University.

“I want to thank the search committee for its diligence in finding the best candidates for this position,” said Dr. Stanley. “I truly believe Dr. Kaushansky will take the School of Medicine, the Medical Center and the Health Sciences to their fullest potential.”

I also would like to extend a special thanks Dr. Richard Fine, for taking the School of Medicine to such heights during a difficult political and fiscal environment and to Dr. Craig Lehmann for his patience and fortitude while serving in the dual role of Dean of the School of Health Technology and Management and Interim Executive Dean of the Health Sciences while this search ensued, and prior to that as well. Craig will now resume full time efforts in his role as Dean, and the University greatly appreciates his dedication.”

Dr. Kaushansky is a native of Montreal, Canada, whose father “wanted to be an American” and moved the family to the west coast at the age of 2 years. He and his wife Lauren, an outstanding educator in her own right, hope to settle in the Three Village communities. Dr. and Mrs. Kaushansky are the proud parents of two children, Alexis (28), a post-doctoral fellow in Molecular Biology in Seattle, WA, and Joshua (25), an economist in Boston, MA.