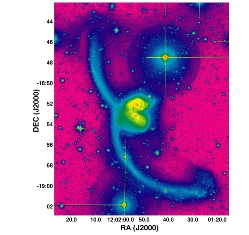 STONY BROOK, NY, June 9, 2009 – Astronomers are announcing today that they have discovered new tidal debris stripped away from colliding galaxies.

Deep optical image of the Antennae galaxies. New tidal debris is found at the northern tip.

The research will be being presented during a press conference at the 214th annual American Astronomical Society meeting in Pasadena, California by Drs. Jin Koda at Stony Brook University, Long Island, New York; Nick Scoville of California Institute of Technology; Yoshiaki Taniguchi of Ehime University, Ehime, Japan; and, the COSMOS survey team.

Often seen in public media and textbooks, these galaxies are well-known galaxy collisions.

“We did not expect such enormous debris fields around these famous objects,” says Dr. Koda, Assistant Professor of Astronomy at Stony Brook University. “For instance, the Antennae – the name came from its resemblance of insect ‘antennae’ – was discovered early in 18th century by William Herschel, and has been observed repeatedly since then.”

Colliding galaxies eventually merge, and become a single galaxy. When the orbit and rotation synchronize, galaxies merge quickly. New tidal tails therefore indicate the quick merging, which could be the trigger of starburst activities in Ultra Luminous Infrared Galaxy (ULIRG). Further studies and detailed comparison with theoretical model may reveal the process of galaxy formation and starbursts activities in the early Universe.

“Arp 220 is the most famous ULIRG,” says Dr. Taniguchi, who is Professor of Ehime University in Japan. “ULIRGs are very likely the dominant mode of cosmic star formation in the early Universe, and Arp 220 is the key object to understand starburst activities in ULIRGs.”

“The new images allow us to fully chart the orbital paths of the colliding galaxies before they merge, thus turning back the clock on each merging system,” says Dr. Scoville, the Francis L. Moseley professor of astronomy at Caltech. “This is equivalent to finally being able to trace the skid marks on the road when investigating a car wreck.”

According to Dr. Koda, the extent of the debris had not been seen in earlier imaging of these famous objects.

“Subaru’s sensitive wide-field camera was necessary to detect and properly analyze this faint, huge, debris,” he said. “In fact, most debris are extended a few times bigger than our own Galaxy. We were ambitious to look for unknown debris, but even we were surprised to see the extent of debris in many already famous objects.”

EDITOR’S NOTE: The gray-scale and false-color photographs can be obtained over the Internet via http://www.astro.sunysb.edu/koda/press/ as soon as the embargo expires on June 9.